Chemainus is a small town of approximately 3900 and is located about 80 kilometers north of Victoria, BC.

The drive itself up to the town is on the breathtaking Malahat Drive which passes through some amazing scenery.  (See our post on a day trip which includes stops along the way)

Chemainus’ claim to fame are the numerous and beautiful outdoor murals that you’ll find all over town!  Look for the ‘footprints’ on the sidewalks that guide you to them … although they’re easy to spot without following them! 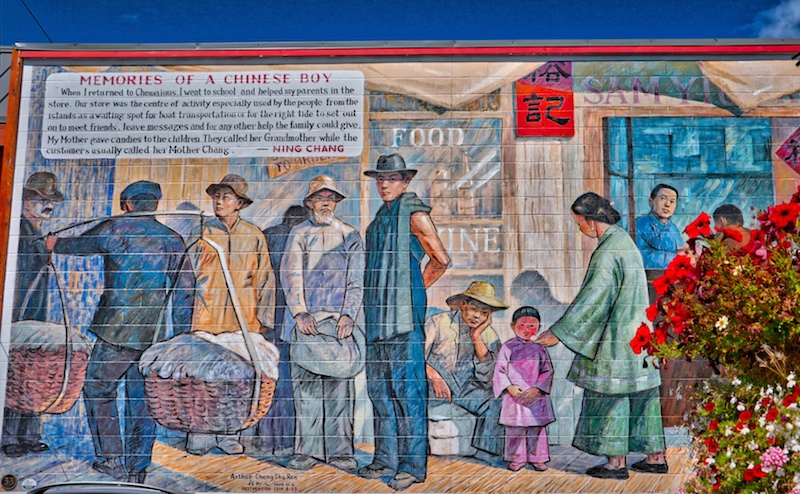 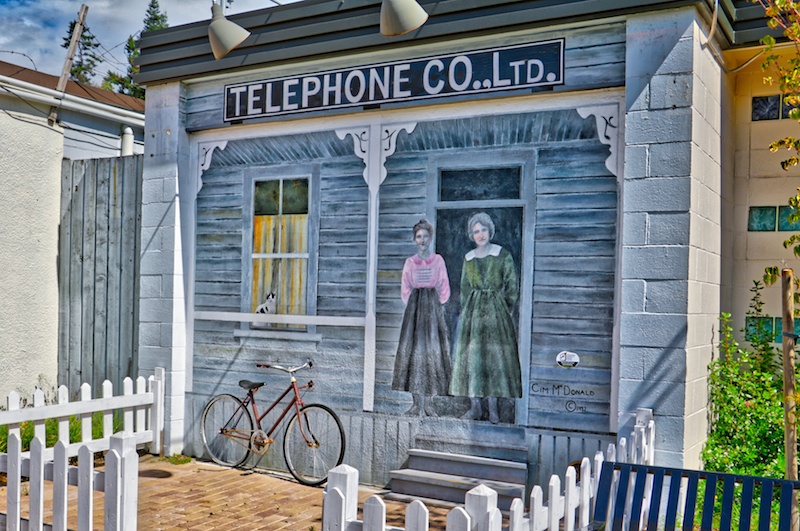 These are two of the many, many murals you’ll see all over town!

Here’s some history of how the ‘mural town’ came to be:

Chemainus, on Vancouver Island’s east shore, is a little town snuggled in between a mountain range and the ocean, isolated with a river cutting it off from the south and a major highway to the north. A town that was born of the hands of labourers, with its only industry failing, Chemainus showed the world its true spirit and determination, and was to achieve fame through the hands of artists.

Such is the condensed recent history of “The Little Town that Did.”©

Mining, fishing and forestry were the original industries that gave work to a diverse collection of people from all over the world including Chinese, Japanese, East Indians, Scots, and Germans.  Some came to find their fortunes in the mines and when that didn’t work out they stayed to work in the forestry and fishing industry.

Of course, the Cowichan Valley has been the home of the original first nations peoples and their ancestors for countless generations and their history and lives became intertwined with all the various settlers and laborers.

For many years the main industry in Chemainus had been logging and processing the logs in the mill.

But British Columbia plunged into a recession in 1981 as resource revenues fell and affected communities large and small. Chemainus was the typical mill town whose very existence was a result of the mill itself.

With an impending threat of possible closure of the town’s major employer, Chemainus was faced with the very real possiblity of becoming a ghost town.

Under then BC government of Bill Van der Zalm, community initiative grants were being developed to aid towns in revitalization projects. The mayor at the time, Graham Bruce, was young, enthusiastic and forward-thinking. He presented the concept to the community and they in turn rallied to oversee what was to be the first community to complete a revitalisation, and also to become a world-famous example of how even a small town can create substantial change for survival.

In addition to the murals, you’ll find many restaurants, gift shops, ice cream parlours, bakeries and even a funky hardware store!  Most of these will be found all on the main street of Chemainus, but don’t miss the walk down to and through ‘Old Town Chemainus’ which is less commercial but charming nonetheless.  The walk will take you right down to the ocean for spectacular views! 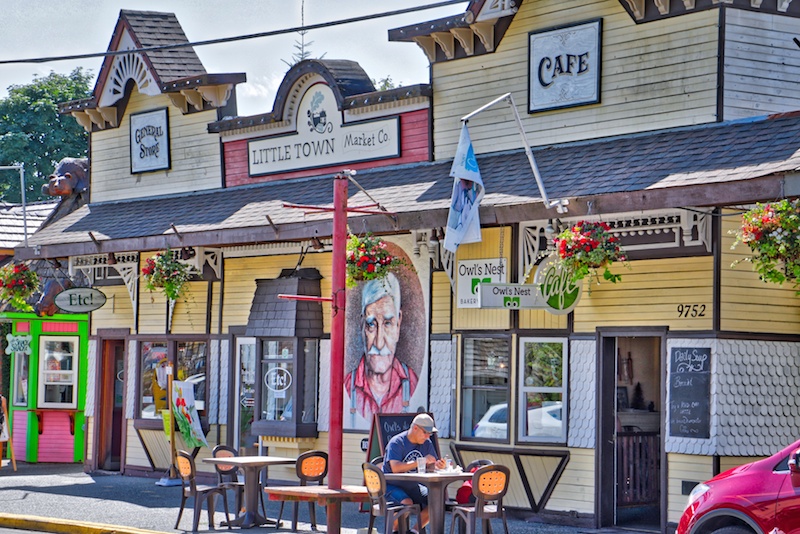 Main Street in Chemainus, BC 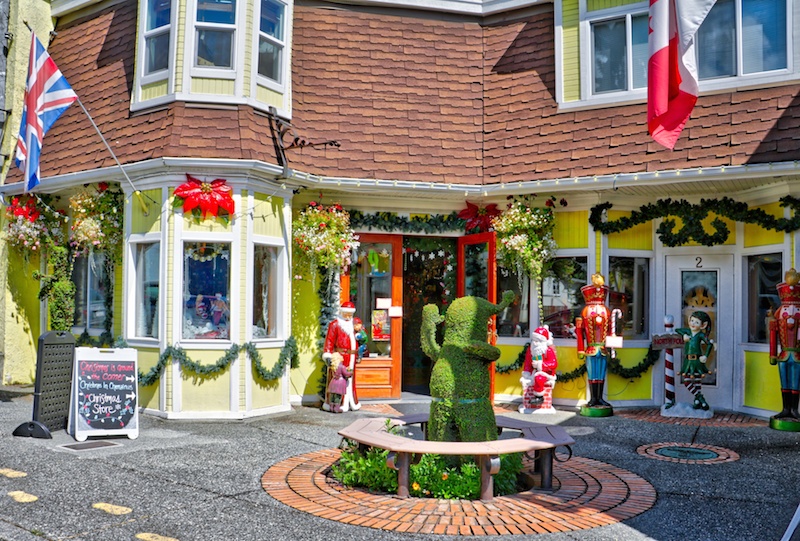 Christmas Shop on main street in Chemainus, BC 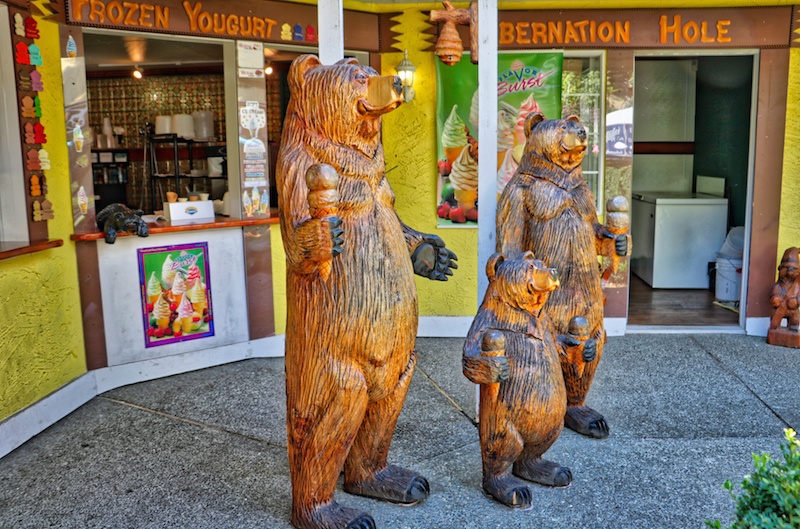 Ice Cream Bears in Chemainus, BC 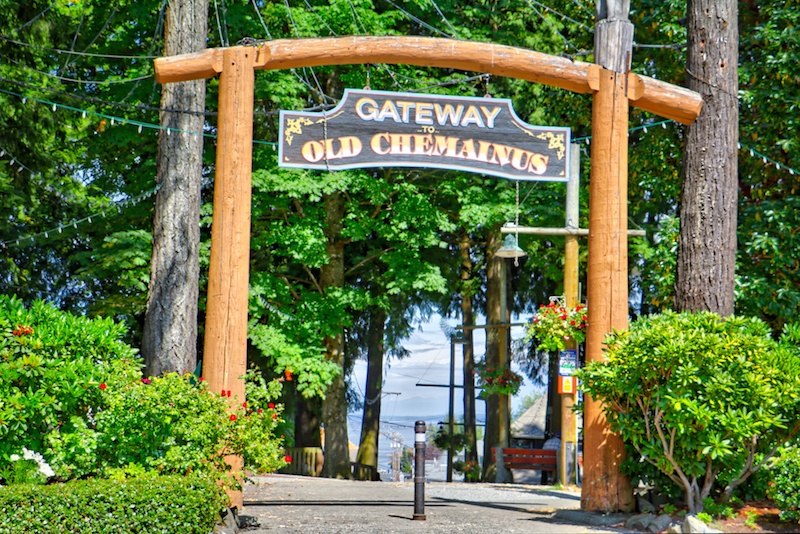 Gateway to Old Chemainus, BC

In addition to the many beautiful murals, Chemainus is home to the Chemainus Theatre – Live Dinner theatre with excellent theatre offerings both musical and non-musical productions! 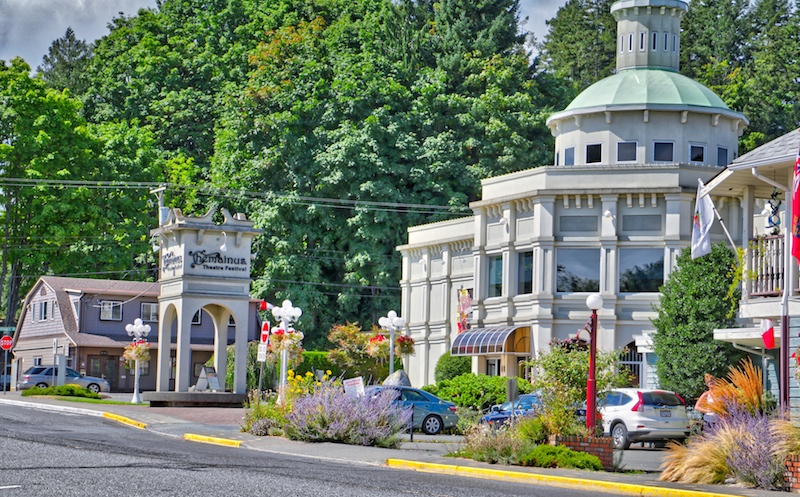 There’s lots of parking all over town on the streets and there are also some parking lots.  But it’s a busy place and when we went there recently (summer of 2017) we found one of the lots filled with vendors selling crafts and food – which is great but takes up a lot of parking spots – so get there early if possible!  Lots to see and do and be sure to take a break at one of the many good restaurants!  And be sure to have some ice cream!  Mmmmm!