The Suitcase Project, photographed by Kayla Isomura, is coming to the Sidney Museum on April 4 and will run until July 4, 2022.

Stemming from the history of Japanese Canadians and Americans during the Second World War, this multimedia exhibit highlights why this history is relevant more than 75 years later.

“What began as a photography project, capturing subjects in their homes, turned into conversations about contemporary issues, whether political or personal,” said Isomura, who identifies as fourth generation Japanese Canadian. “In today’s landscape, Japanese Canadians and Americans don’t necessarily face the same degree of racism and discrimination as our ancestors. However, we remain affected by this history in many ways.” 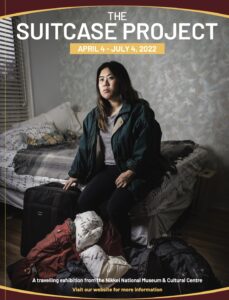 “Struggling to understand and see ourselves is one aspect of that, as well as recognizing the ongoing displacement and discrimination other minority groups and people of colour face today.”

In 1942, approximately 23,000 Japanese Canadians and more than 100,000 Japanese Americans living on the west coast were uprooted from their homes and placed in internment camps or incarceration.

Subjects for The Suitcase Project were given 24 to 48 hours notice to assemble their things, similar to what many Japanese Canadians faced in 1942.

“In the Canadian context, Japanese Canadians were not allowed to return home and their possessions were sold by the government or looted,” said Isomura. “If you were going to lose everything—your home, your business, your memories and personal possessions—what would you take outside of things for survival? Or would you focus on your practical needs?”

“I never knew what my grandparents or great grandparents packed with them when they were interned, so I wondered what I could survive with sentimentally and how others would interpret this idea,” she said. “The original idea wasn’t just about what or how people would pack, but also what they are forced to leave behind.”

The Suitcase Project subjects range from infants to 51-year-olds, and they were photographed in the Lower Mainland, Vancouver Island and Western Washington.

In addition to the exhibition, the Sidney Museum will also be virtually hosting Isomura for an artist’s talk in April 2022.

Due to the COVID-19 pandemic several additional public health measures have been put in place at the Museum. Please see the Museum’s website for more details on health and safety protocols.

The Suitcase Project is being presented at The Sidney Museum, 2423 Beacon Avenue L3, Sidney, BC from 4 April until 4 July, 2022. The Museum is open seven days a week from 10-4 by donation. Procedures are subject to change based on public health recommendations. Please see the Sidney Museum’s website to book your time now.

CLICK HERE FOR MORE INFORMATION AND TO BOOK A TIME!