The Bay Centre in Victoria, BC

The Bay Centre in Victoria, BC

After shopping at all the unique, local stores around downtown Victoria … you might want to take in the large indoor mall that is The Bay Centre.

This is a large, multi-storied indoor mall housing over 90 stores with a food court at the very top level.  Lots of parking in the underground lot off View Street. 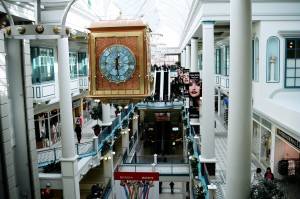 The Bay Centre, formerly the Victoria Eaton Centre, is a shopping mall in Victoria, British Columbia, Canada. It is bounded by Douglas, Government, Fort, and View streets, in the city’s historic centre.  It has 39,114.8 square metres (410,264 square feet) of retail space.

Opening in 1989, the mall was the first large shopping mall in Victoria’s city centre. It occupies two city blocks of the Old Town area, including the site of the original downtown Eaton’s store, (previously Spencer’s) at 1150 Douglas Street,.  Eaton’s was demolished in 1987–88 to make way for the Eaton Centre project. The development of the shopping centre was initially the subject of controversy, as construction involved demolishing several historic buildings (or reducing them to facades over new construction) and closing one block of Broad Street.

When Eaton’s went bankrupt in 1999, the Eaton’s store in this mall was occupied first by Sears Canada, and then by The Bay (now Hudson’s Bay), for which the mall was renamed. (*Quotation from Wikipedia)