In British Columbia (as in all of Canada) the currency is the Canadian Dollar ($).

The dollar is divided into 100 cents – so when you see a price of $12.55 it means Twelve dollars and fifty-five cents. 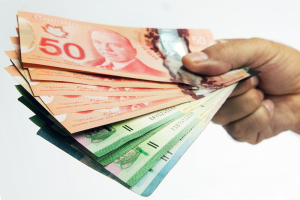 We now have single dollars in coin form (called locally a ‘loonie’ due to the picture of a loon on the coin) and a two-dollar coin (called a ‘toonie’).

Credit Cards accepted in most Canadian establishments are: Visa, Mastercard & American Express. You may find a place here or there that accepts Diner’s Club but not very often. Most places that accept credit cards will accept a chip and PIN (if you have one with your card) in their card readers. If you don’t have a chip & PIN, you can still swipe your card and sign the receipt. You may be asked for additional I.D. if that’s the case.

Debit Cards are accepted also in most Canadian establishments if your card is linked thru Interac, Plus or Cirrus. When in doubt, look at the ATM and it will indicate what cards are accepted.

In Canada, we have what’s referred to as ‘The Big Five’ – these are the most numerous of the banking institutions. They are: (click on individual banks for locations)

Other large banks (in Victoria) include:

These banks can exchange foreign currency, wire transfers, sell money orders/drafts; and they all normally have ATM’s where you can withdraw funds using your debit card. Be aware tho that they will (of course) only give you Canadian currency – the exchange will be added (or subtracted) by your bank where you’ll see it on your bank statement. Also note that many banks now only dispense $50 bills while some still give out $20’s only.

There will always be a fee for using an ATM outside of your own bank. Fees will vary.

In addition to banks, Victoria also has a number of credit unions. Credit unions are much like banks, the difference being you need to be a member to belong and conduct your banking with them. For a visitor however, if all you need to do is convert your currency, purchase a money order or use an ATM, a credit union will usually do the job for you.

Here is a list of credit unions in Victoria:

In addition to banks, there are a few places in Victoria where you can exchange your currency for Canadian dollars or visa versa. Click HERE for a listing.

It’s always advisable to pay for your purchases with Canadian dollars as many places will not accept foreign currency. (You may be fortunate enough to be able to pay in U.S. dollars … but I know of no other currency accepted besides that. And you may not get the best rates, so it’s advisable to exchange your money at a bank or legal currency exchange establishment.) If they do not accept your currency, you can always pay with your credit or debit card.