Every fall millions of Pacific salmon fight their way up the streams, creeks and rivers of the Pacific northwest working their way back to the their home pools where they were originally spawned. Here, they will spawn a new generation of salmon then die.

In the Goldstream River, the salmon will usually appear about mid-October, and may be seen for about nine weeks. The dates varying from year to year. There are five varieties of Pacific salmon but at Goldstream, it is the Chum salmon that is most prevalent. However, you may also see some Coho and Chinook salmon, as well as Steelhead and Cutthroat trout. 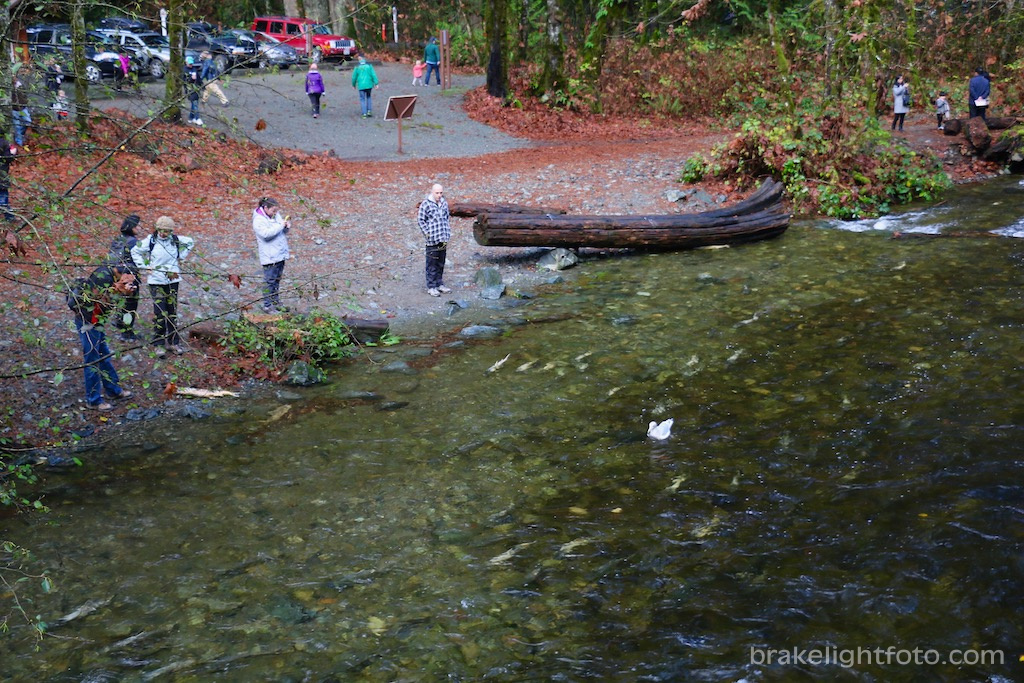 What to Look For

Find a good location to watch, then stand quietly and try not to disturb the fish. You will see some fish working their way upstream, resting in the eddies or pushing their way through the current. You will see others in groups or pairs digging or defending their nests, which are called ‘redds’. It is the female which chooses a spot to spawn and digs a redd for her eggs. The male will stand guard nearby and fight off rival males. Once the redd is ready, the female will deposit her eggs, called ‘roe’, then the male will swim in and fertilize the eggs. The female will move upstream and flush down some gravel to cover the eggs.
You will notice that some of the fish look quite odd, nothing like the shiny silvery fish you are used to seeing when they are caught in the ocean. When the male male Chum salmon enter the breeding streams they begin to develop bright colours and a hooked jaw. 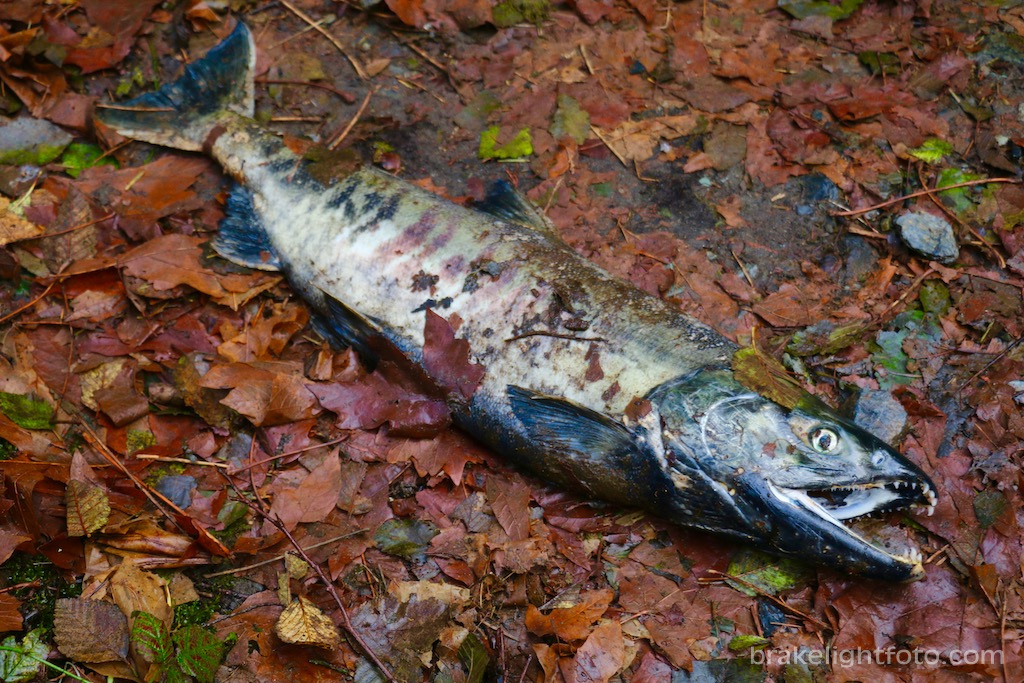 Male Chum Salmon, not the bright colours and hooked jaw

There is more to see than just the spawning salmon though. Spawning salmon draw many opportunists to the rivers. Although you may not see them from the park, seals and sea lions will show in Saanich Inlet to try and intercept the salmon as the approach the estuary. Bears love to take advantage of a good salmon run, though bear sightings in Goldstream Park are not that common.

Of course racoons and river otters will show up to take their share. Cutthroat trout move in from the ocean to feast on the roe. You may see a small wren like bird, the American Dipper, flitting around on the rocks and plunging into the water to find some eggs. Gulls show up in large numbers to feast on the dead and dying salmon. Later in the year as the salmon run dies down, Bald Eagles will show in large numbers to gorge on the dead salmon carcasses. 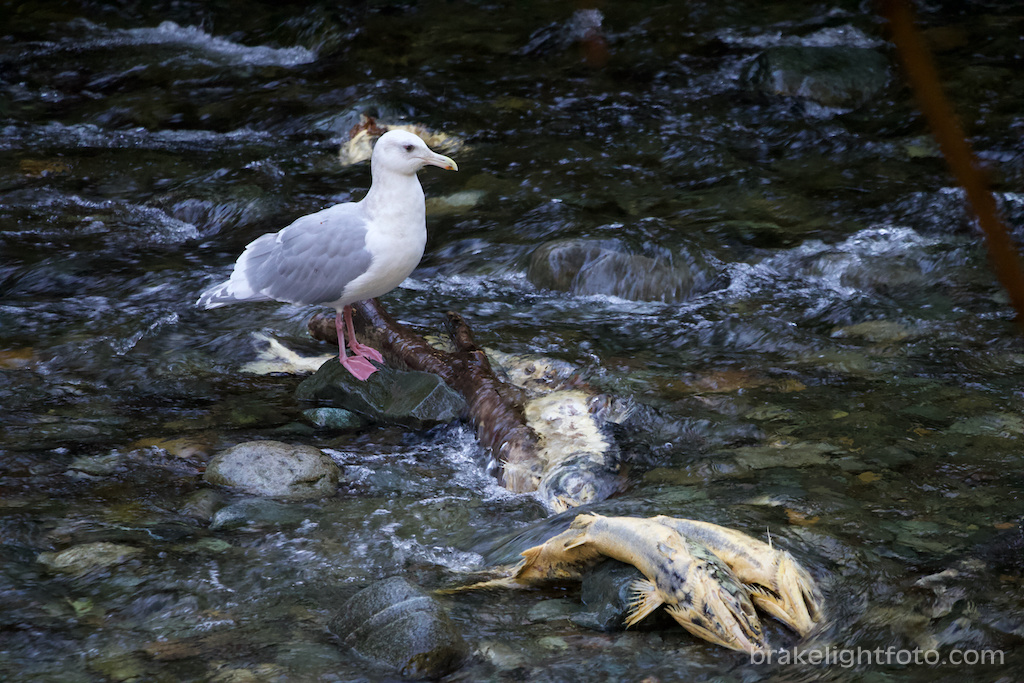 Gulls have an easy meal 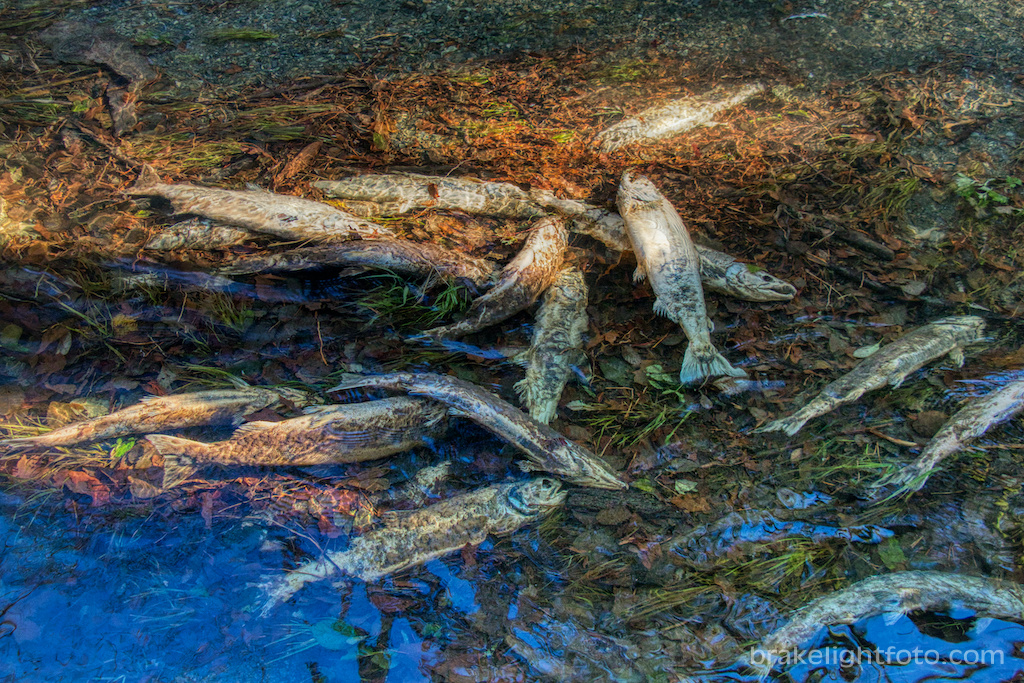 These Chum salmon have traveled thousands of kilometers in their four-year lifetime and are at Goldstream to continue their life-cycle by spawning in the river. Visitors must remember that the salmon come first, so please follow a few guidelines when visiting:

* Keep all dogs on a leash & out of the river. * Approach the river bank slowly and quietly. * Don’t throw anything in the river.

1. Avoid wearing bright coloured clothing, especially reds, purple and pinks which salmon see very well.
2. Avoid coming on weekend afternoons if you can, the park is very crowded.
3. Please car pool if possible, there is limited parking.
4. Bring sunglasses with polarizing lenses to cut sown on glare from the water. These are especially good for children. You can also get polarizing lenses for you cameras.
5. Start your visit at the Nature House. Learn more about eagles and other birds of prey, catch one of the free interpretive programs, or watch the slide show that explains the Bald Eagle life history. Hot beverages, pastries and eagle books are available at the bookstore.
6. Try to find viewing sites that are up high (top of banks, bridges) to increase visibility, while staying on the trail. Small children can see better up on your shoulders.
7. Avoid moving quickly, and approach the river bank quietly. Find fish that are actively building nests and watch for the spawning behaviour.
8. Leave you dog at home. If you do bring a dog it must be on a leash and kept out of the river.
9. Bring your binoculars. Because of changes in the way BC Parks manages the estuary, there are increasing numbers of Bald Eagles and other birds using the salmon round. From Dec. 6 to Feb 29 there will be special Eagle Extravaganza Programs to help interpret the eagles.
10. Do not leave your wallet, purse or other valuables in your car. 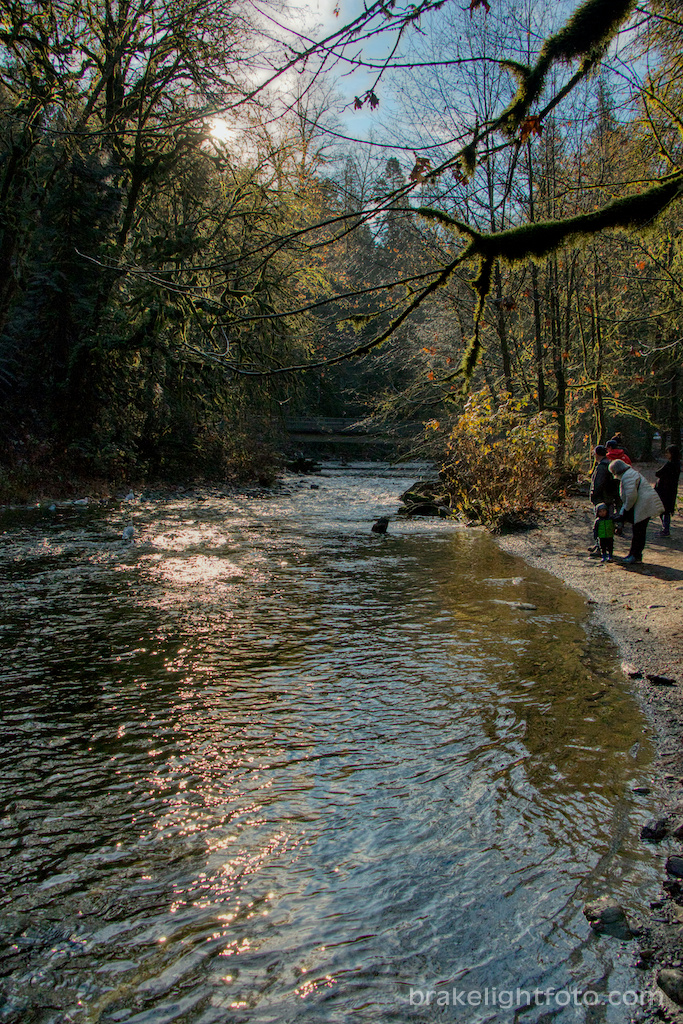 How to get to Goldstream Provincial Park and for more information on the park,  click the link.

I've lived in Victoria over 30 years and I still can't believe how great this city really is! My husband, Bruce, and I have traveled the world but coming home to Victoria is still quite often a celebration. Together, we want to share our love of the city and the area by giving you an 'insider's' insights of where to go - what to do - and how to get there!
Toggle Sliding Bar Area