The Colquitz River Trail is perhaps one of Saanich’s least-known public trails.

Starting roughly at the western corner of Interurban Road and Burnside Road West, Colquitz River Trail was envisioned as early as 1967 and was one of the municipality’s first efforts to protect urban streams. The waterway, alternatively referred to as a river or creek, flows from the south end of Beaver Lake to eventually discharge into Portage Inlet at Cuthbert Holmes Park.

“The idea is that the trail will eventually end up at Beaver Lake,” said Mike Goldsworthy, a park planner with the District of Saanich. “When fully built, the trial will run nine kilometres, from the Gorge walkway at Dysart.”

The municipality acquires land as it becomes available, so the vision may take another 20 years to complete, Goldsworthy said.

People can walk, run or cycle five kilometres north on the trail until it connects with the Royal Oak Trail at Brydon Park, at the south end of Royal Oak Shopping Centre. 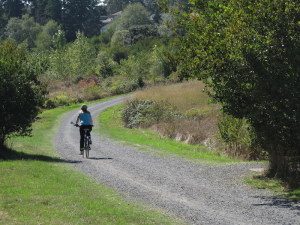 The south portion of the trail is arguably more scenic and shaded from the sun. On this part of the trail, people follow the meandering route of the creek until they reach Hyacinth Park, near Marigold Road. The trail emerges from the shade after Hyacinth Park as it makes its way toward Panama Flats and nearby Panama Hill Park, which boasts Garry oak meadows as well as some First Nations archeological sites.

The south trailhead is noisy, with traffic from the Trans-Canada Highway speeding overhead. It is also hard to spot, tucked to the west of the intersection of Interurban and Burnside Road West, both busy arterial roads. But the sound of traffic quickly gives way to the soothing sound of the creek as one enters the canopy of mature oaks that flank both banks of the trail. The path consists of compacted gravel suitable for bicycles and wheelchairs. 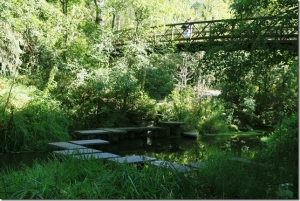 across the creek itself.

Depending on the season and water level, people can skip and hop across the creek on these man-made steps. The landscape designer didn’t stop there.

On the two longest sections, the steps end as benches on either end of the crossing.

Along other sections, the steps merely stop at the water’s edge, seemingly inviting people to take off their shoes and dangle their feet into the slow-flowing creek on a hot summer day.

Those on wheels can traverse the creek on a bridge that spans the waterway.

Signs along the trail remind users that the creek is still a significant salmonbearing stream. People are also reminded of community involvement with a number of pebble mosaics embedded at various points along the path. These mosaics were created, with guidance by local artists, by Grade 8 students at the nearby Colquitz Middle School as a B.C. Rivers Day project a few years back.

Difficulty level: 1-2: The trail is mainly flat. Inclines along the way include the path leading up to the bridge that spans the creek and the summit of Panama Hill Park.

Highlights: The part of the trail that runs parallel to Colquitz Creek – between Burnside Road West and Marigold Street – is the most picturesque and shaded. It also contains all of the street art and benches.

Time: Walking the five-kilometre length of the trail can take up to an hour, but the first section can be completed in 10 to 15 minutes.

Location: Trail starts at the north end of Tillicum Mall, corner of Interurban and Burnside Road West. Park at mall or at a small lot off Interurban.

For a complete map of the trail, click HERE. 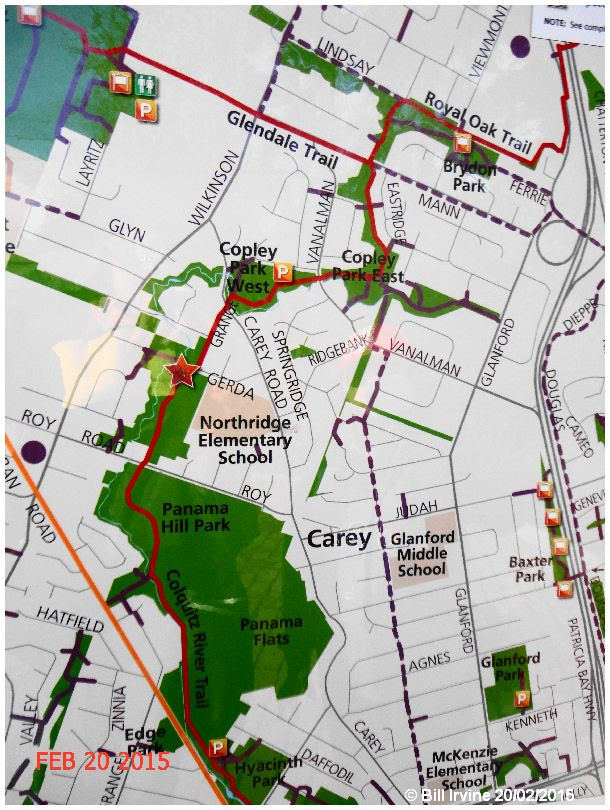