If you’re a history buff … or if you’re simply interested in the heritage aspects of a place, here’s some of our most interesting and entertaining locations:

Craigdarroch Castle is a definitively Victorian experience and a National Historic Site. It is a shining example of a “bonanza castle” — massive houses built for entrepreneurs who became wealthy during the industrial age. In this case, the industrialist was Robert Dunsmuir, a Scottish immigrant who made his fortune from Vancouver Island coal.

After the owners death in 1908, the castle has had several incarnations:  A military hospital, a college and a conservatory.

For many years now the work as been on-going to restore the castle to its original glory and includes one of North America’s finest collections of Victorian residential stained and leaded glass windows, all of which are believed to have been produced by an American studio. 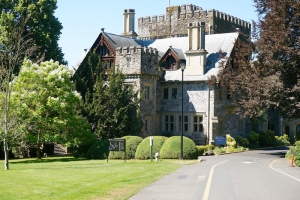 The Castle was completed in 1908.  James Dunsmuir commissioned Samuel Maclure, a Victorian architect, to design the “Castle”, and Messrs. Brett and Hall, landscape artists of Boston, Massachusetts, to plan the gardens and surroundings.

Early in 1910, James sold his many businesses and retired to enjoy his beautiful home, his yacht “Dolaura”, his shooting, fishing, golf, etc. He died in May 1920, at the age of 69. His wife, formerly Laura Surles of North Carolina, lived on at Hatley Park with her daughter Eleanor until she died in August, 1937. Eleanor died six months later.

In November 1940, it was purchased by the Dominion Government for $75,000 to begin its career as a Naval Training Establishment. No time was lost. On 13 December 1940 HMCS Royal Roads was commissioned as an Officer Training Establishment for short-term probationary RCNVR sub-lieutenants and operated as such until October 1942.

After a brief history of five years, the Royal Canadian Naval College became, in 1947, the RCN-RCAF Joint Services College. The following year, with the admission of army cadets, Royal Roads became the tri-service College known as the Canadian Services College Royal Roads. In 1968, the name of the College was changed to Royal Roads Military College.

On 22 February 1994, it was announced that Royal Roads Military College would close in the following year. Due to public support, the Province of British Columbia entered negotiations with the federal government of Canada to lease the property and facilities in order to continue its use as a university. Royal Roads University was created on 21 June 1995 by an act of the Legislative Assembly of the Province of British Columbia.

There are acres of lovely gardens to wander through and you’ll probably recognize many of the interiors/exteriors from the many films that have been shot here throughout the years.  There are also lovely views of Esquimalt Lagoon and paths to wander along the water and into some great forested areas as well.

Fisgard Lighthouse and Historic Buildings: Open Saturday and Sunday only

Admission:  An entry fee is charged. For current entry fees contact the sites. 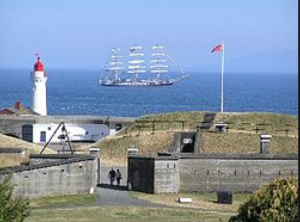 Educational and commercial groups are asked to book in advance.
Guided tours for groups are available at an additional cost, subject to staff availability.

Fort Rodd Hill – A National Historic Site – is a coast artillery fort built in the late 1890s to defend Victoria and the Esquimalt Naval Base. The Fort includes three gun batteries, underground magazines, command posts, guardhouses, barracks and searchlight emplacements. There are numerous interpretive signs and audio-visual stations, as well as period furnished rooms and friendly, knowledgeable staff. Visitors can explore gun batteries and underground magazines built a century ago, as well as searchlight emplacements, command posts…and much more.

At Fort Rodd Hill, visitors can explore gun batteries and underground magazines built a century ago, as well as searchlight emplacements, command posts…and much more. Signs, audio and video stations, and friendly, knowledgeable staff tell the stories of this national historic site.

Families often bring a picnic lunch and stay for a half a day. While the kids investigate our tide pools, parents can enjoy the spectacular sea and mountain views. Come visit soon!

On weekdays: Visitors are welcome to join a free public tour (9:00 am to 4:00 pm) or to explore the building on their own self-guided tour

Location: Tours begin from the Lower Rotunda inside the Main Entrance.

Registration: Advanced registration is not required for public tours and everyone is welcome to join.

Plan to arrive 10 minutes before the tour to allow for time to pass through security screening.

Please note:
The tour schedule for the following week will be posted each Friday afternoon. Please check back closer to your visit for the most up-to-date schedule.

Visitors are welcome to take a self-guided tour whenever the Parliament Buildings are open.

Self-guided tour books are available in a variety of languages at the Tour Desk.

The Neo-baroque buildings face north on Belleville street facing the Inner Harbour and diagonally across from The Empress Hotel. A statue of Queen Victoria stands on the front lawn as well a statue of a soldier to commemorate the province’s World War I, World War II and Korean War dead. Atop the central dome is a gold-covered statue of Captain George Vancouver. Free guided tours of the facility are offered year-round.

Built in the 1890’s by architect Francis Rattenbury, who was chosen to create this landmark and was a bold choice.  Rattenbury arrived in Canada from Britain only a few weeks before his design submission was chosen as the winner.  At the time of the competition, Rattenbury was only 25, and he is still considered one of the youngest architects in Canada to design a legislative building!  The structure is constructed in the Romanesque Revival style of architecture, sits on large manicured lawns, and was intended to introduce a formal and impressive silhouette between the shoreline and the mountainous backdrop.  Rattenbury went on to gain considerable renown, designing many buildings in British Columbia including that other memorable building in Victoria, the Empress Hotel.

St. Ann’s Academy is a testament to the dedication of the Sisters of St. Ann who were integral to the beginnings of education and healthcare in British Columbia. Now a national historic site owned by the Ministry of Technology, Innovation and Citizens’ Services, St. Ann’s remains one of Victoria’s premier landmarks surrounded by heritage gardens and greenspace to provide an oasis in the centre of the Capital city.

Admission is by donation. Visitors may drop in freely during regular operating hours. Volunteers are available to answer questions and provide information.

Guided tours for groups of 10 or more are available on a pre-arranged basis. Tours last about 1 hour. Arrangements can be made for group visits outside of normal operating hours. Special programs are available for school groups.

CLICK HERE FOR MORE INFORMATION ON HOURS AND TOURS