A great place to wander through if you have an hour or two is Victoria’s Chinatown.

It’s the oldest Chinatown in Canada and the 2nd oldest in North America behind San Francisco’s Chinatown.  Located on Fisgard Street, between Government Street & Store Street. 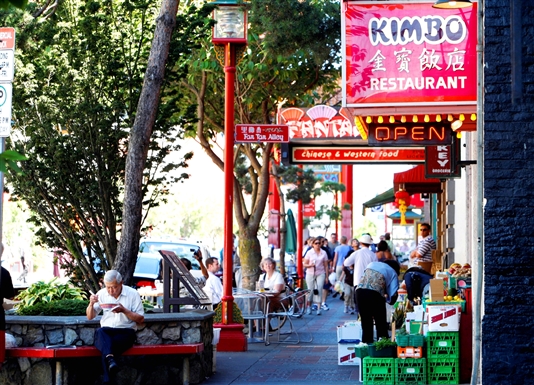 The discovery of gold in the Fraser Canyon in 1858 led a sudden surge in immigration to British Columbia from California, about one third of which was Chinese. Within a year, immigration to the colony directly from China began as news spread of the gold find, but the gold rush was only one reason many Chinese citizens immigrated. Famine, drought or war in their homeland also encouraged the voyage across the Pacific Ocean to Victoria (on the Crown Colony of Vancouver Island en route to the Fraser Canyon, and later to Barkerville and the mainland’s many other goldfields). 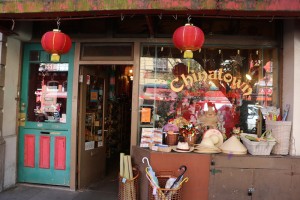 Initially a collection of crude wooden huts, Victoria’s Chinatown rapidly evolved into a dense neighbourhood of businesses, theatres, schools, churches, temples and a hospital. It did gain a dark, seedy reputation however, because of opium factories, gambling dens and brothels. Chinatown grew steadily over the years until its peak in 1911, at which time it occupied an area of about six city blocks in the north end of downtown Victoria.

Victoria’s revitalized Chinatown is a popular area for tourists as well as for the artistic community. The focus is the 500-600 block of Fisgard Street, including famously narrow Fan Tan Alley, the old Chinese School and a small selection of historic buildings and Chinese businesses. Many historic buildings have been well preserved in Chinatown and also in the larger area it once occupied along Government Street, Herald Street, Store Street, and Pandora Avenue. The modern Chinatown continues to be a key component of Downtown Victoria with many tourist attractions, hotels, grocery stores, bars, restaurants, theatres, services, and shopping areas nearby. The district was designated a National Historic Site of Canada in 1995. 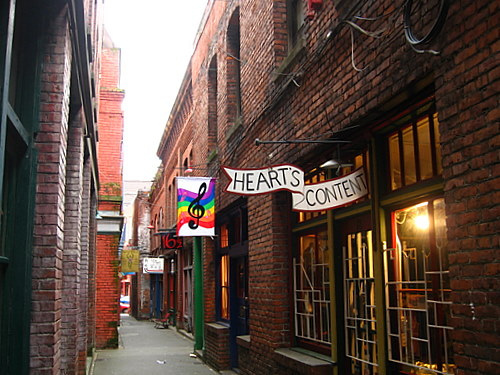 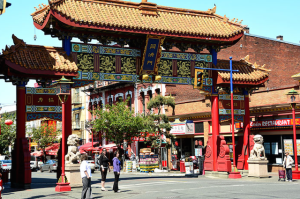 The Gate of Harmonious Interest, Corner of Fisgard & Government St.

There is pay parking on Fisgard Street and many of the other side streets close by, but it can get pretty crowded and full, especially in summer.  There are several parkades in the area where you can park for longer times while you wander throught Chinatown and neighbouring streets.