There are many historic buildings in and around Victoria and some of the loveliest ones are the churches.  Here are some you may wish to check out.  Many are still in operation as places of worship, others have been converted to various other uses.  The first part in our series is the smaller, less grandiose, often rural churches that can be found in and around the city. 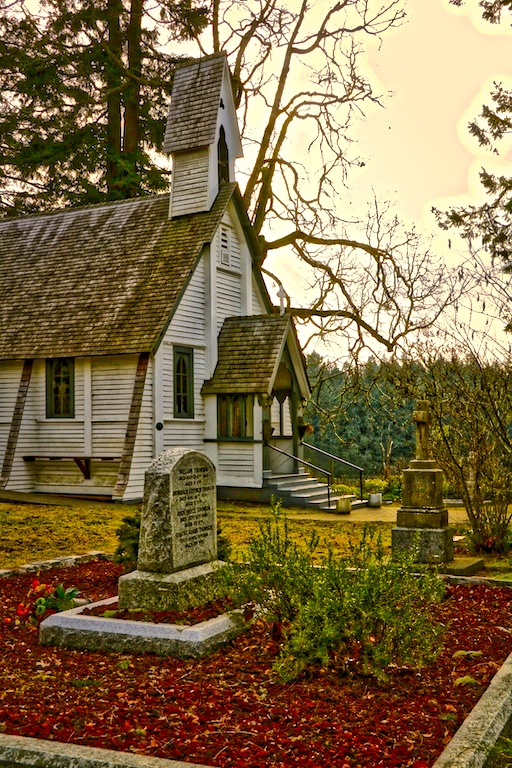 This church was founded in 1862 and consecrated on October 8, 1868.  It is the oldest church on Vancouver Island used continuously as a place of worship since it’s construction.  In 1984 the church was designated a heritage building by the District of Central Saanich.

For 150 years, St. Stephen’s Church has been a place of refuge and rest.

The church is usually open, but even if it’s not it’s a beautiful and serene place to sit, paint or enjoy a picnic. 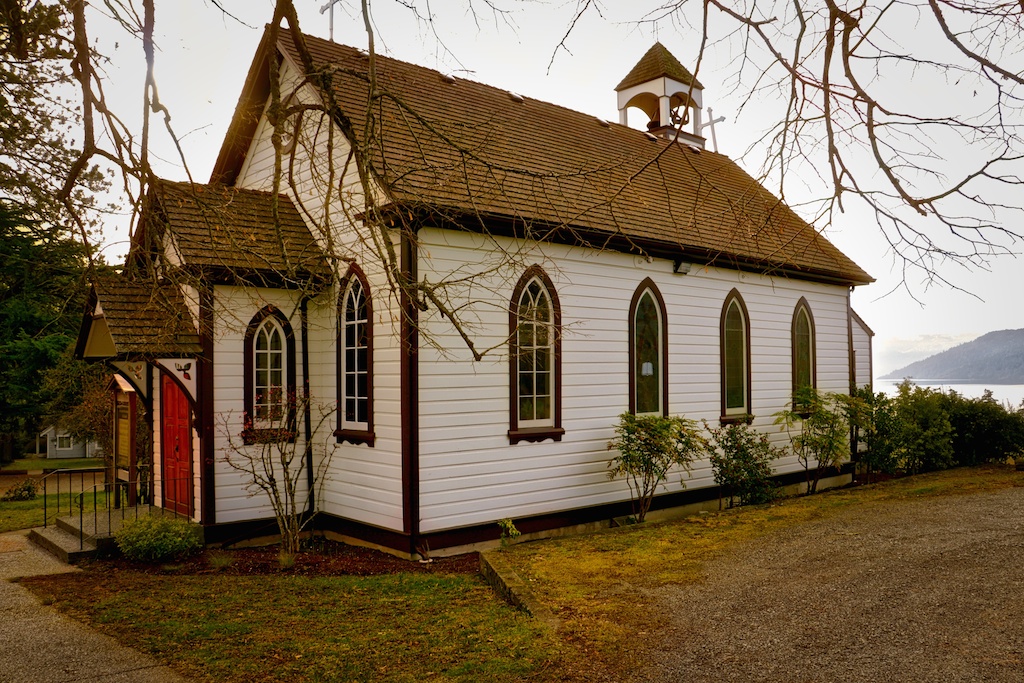 Our Lady of the Assumption Catholic Church

In 1865, Father Mandart, a Breton, was ordained for the Victoria Diocese. He is credited as being the real founder of the Saanich Mission. On his arrival he fashioned a church and home from a large fallen tree with upturned roots. With help from the First Nations people of the area, he then built a small church, which was later blessed and dedicated to the Assumption of the Blessed Virgin by Bishop Seghers in 1876. Upon Father Mandart’s recall to Victoria in 1886, priests from the Cathedral served the Saanich Mission.

In 1893, one year after his ordination in Europe, Father Adrian Joseph Vullinghs performed his first baptism in Saanich. Apparently he had found Father Mandart’s original 20 x 26 foot church, built of logs with squared timbers for pews; an altar of paper and living quarters consisting of two small cold rooms at the back of the church. He served the area from 1893 to 1909 and built the present church and residence on West Saanich Road. 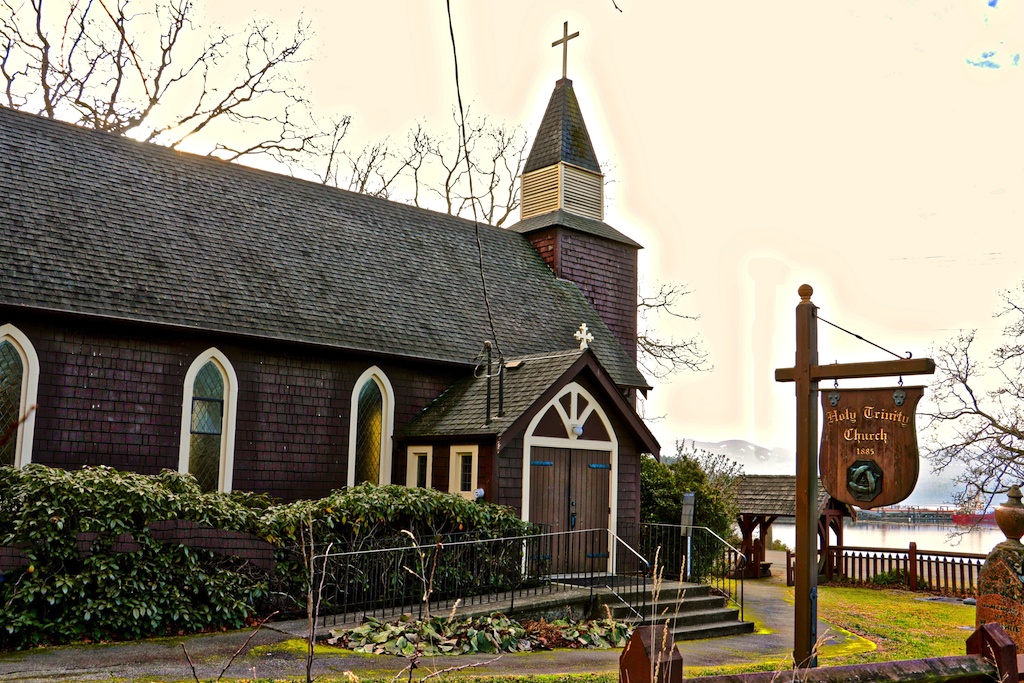 In 1884, George Mills donated the site for the church and parsonage in 1875.  Holy Trinity was consecrated in 1885 by the first Bishop of Columbia, Rt. Rev. George Hills, who travelled from Victoria accompanied by his archdeacon and three clergy.  Since the original construction of the church, several modifications have been made. The first was the addition of a bell tower in 1889.  In 1893, the east window of tinted glass was placed in memory of Henry Brackman, a founding member of Holy Trinity Church.   In 1927, all of the windows except the east window were replaced with tinted glass. Each window is in memory of a parishioner. An oak panel on each sill identifies the memorial.

Many pioneers of the Saanich Peninsula are buried in Holy Trinity Cemetery. At least 20 area roads and geographic features bear names of cemetery occupants.

Early plans of Holy Trinity Cemetery included trees which were planted on the south and west boundaries. Many of these trees are native Douglas fir, but some exotic trees are included, and are found also in the cemetery itself. Over two dozen flowering or ornamental trees are present including flowering cherry and plum, lilac, garry oak and English oak, American elm, copper beech, birch, dogwood, Coulter and Scots pine, cedrus and spruce. Two trees which have dedication plaques are an English oak from Windsor Great Park and a Scots pine from Kew Gardens. Both were planted to commemorate the coronation of King George VI in 1937. 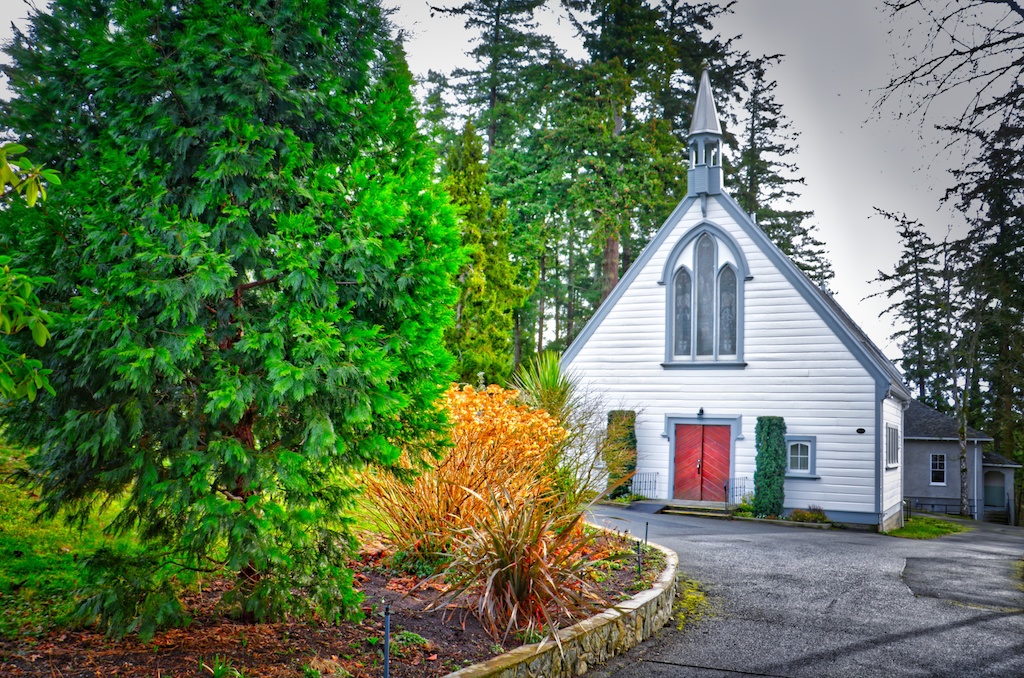 St Michael and All Angels Church

The church was constructed in 1883 and was consecrated on St. Michael’s Day of that year. The land was donated by a local hotel-keeper, Mr. John Stevens. Building materials were supplied by Mr. Hudson Roper. Initially, there were about 100 parishioners.  The men built the church and the women members cooked meals to sustain them.  The total cost of the construction was under $2,500.

Our Cemetery was consecrated in 1912 and records exist of burials since that time. Today’s parishioners take pride in keeping the cemetery well groomed. 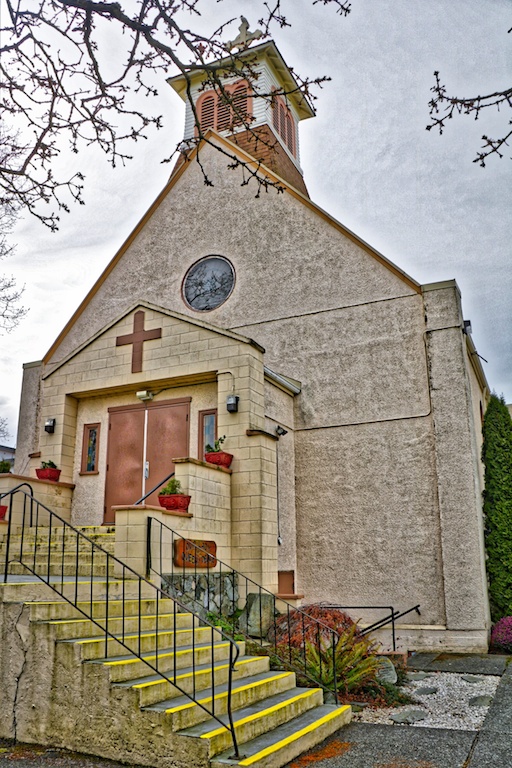 Our Lady Queen of Peace

Construction began in August 1929. The church was dedicated to ‘Our Lady Queen of Peace’ as a memorial to those who died in the First World War. The first Mass was celebrated in the basement on March 30, 1930 and the first official Mass was celebrated in the Sanctuary of the church on December 25, 1930.
In the spring of 2003, while visiting Prague, in the Czech Republic, Fr. Bernard Hanley was presented with the statue of the Infant Jesus. On August 30, 2003, with the permission of the Most Reverend Bishop Raymond Roussin, Our Lady Queen of Peace Parish was Designated as an authentic Shrine dedicated to the Infant Jesus of Prague. Special Devotions to the Infant of Prague and blessing with the Holy Oil from Prague, are held every Thursday following the noon Mass. 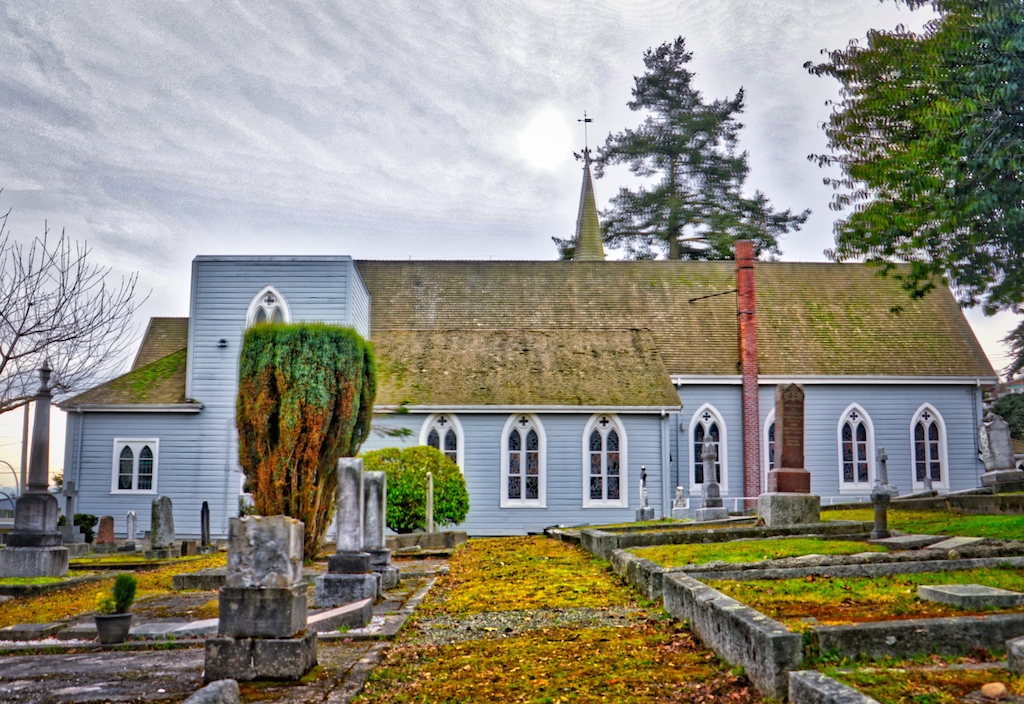 St. Luke’s Anglican Church is a Gothic Revival-influenced structure located at the corner of Cedar Hill Road and Cedar Hill Cross Road in the Quadra area of Saanich. This historic site also includes a graveyard.

Built in 1888, St. Luke’s Anglican Church is valued as one of the area’s early religious buildings. Constructed for the first settlers of the Saanich Peninsula, it is a significant indication of the extension of ecclesiastical outreach beyond the historic epicentre of the young city of Victoria. This church served members of the Church of England who lived well beyond the city limits in the late nineteenth century. 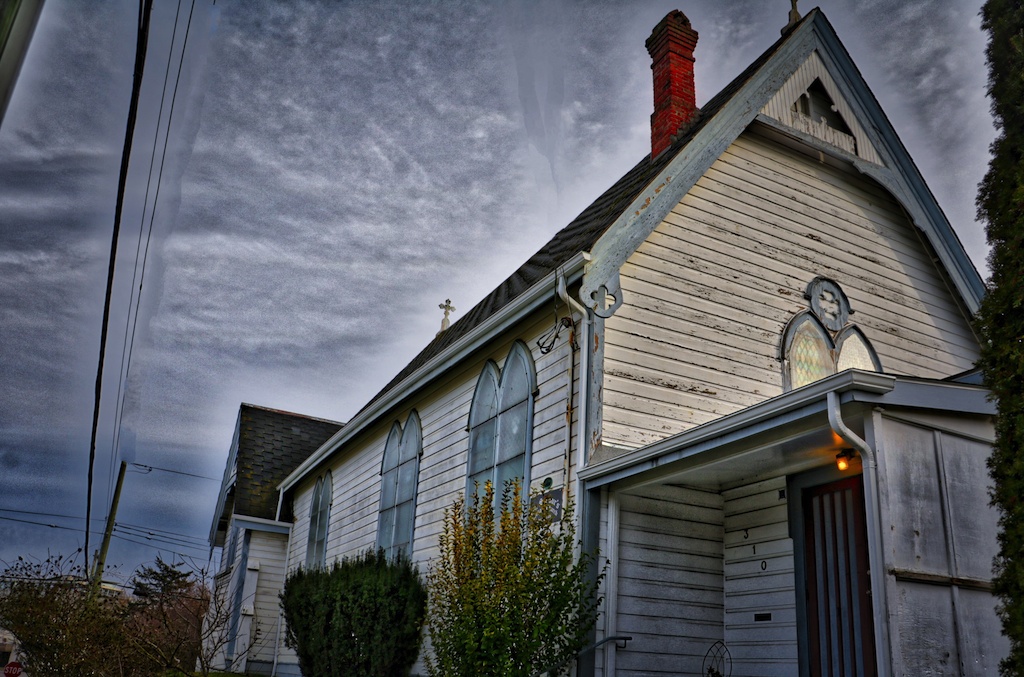 With its hall, built as a church school in 1893 for $600, and the 1911 manse at 512 Catherine St by architect Thomas Dealtry Sedger, it constitutes a complex entirely in keeping with the scale of the surrounding houses. The style is Gothic Revival, with fine stained glass windows and exterior detailing.

The design was described as “of simple lancet character, with wagon roof.” VDC 20 May 1891 It was constructed for $2,644 and consecrated May 19, 1891 by the Rt. Rev. George Hills, first Anglican Bishop of BC. The church bell, a gift from the Dunsmuirs, came from an E&N steam locomotive. One rector apparently refused to ring it, as he believed it to have been stolen before being donated to the church!

In 2010 the Anglican Diocese of BC made the decision to close seven of its Greater Victoria area churches: St Saviour’s was of one of them. The last service was held in March 2010. Rainbow Kitchen, a soup kitchen, continued to use St Saviour’s hall until 2011. The whole property (church, hall and rectory) was sold to a private purchaser. 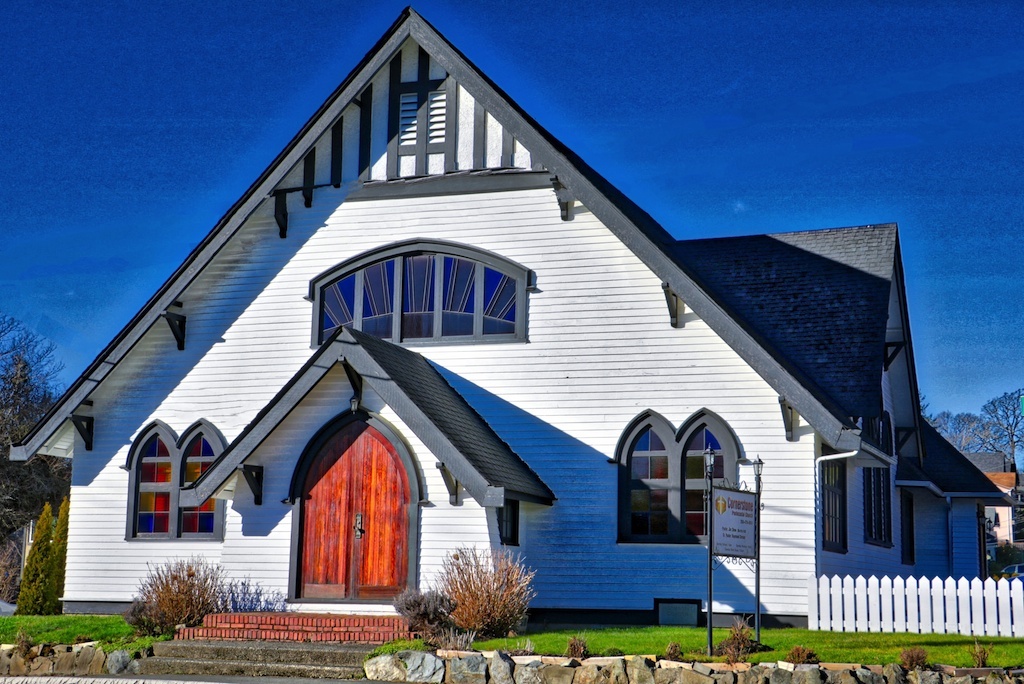 The cornerstone was laid on July 29th, 1913 and the building was dedicated October 26th of that year. Built on privately donated land by people who volunteered their time and labour, the church was a testament to the community spirit of the congregation. The Wilkinson Road Church Ladies’ Group gave their time and energy, shaping the early life of the church, exemplifying community building and early pioneer life in the area.
In 1914, the name of the church was changed to Wilkinson Road Methodist Church. After Unification in 1925, it became the Wilkinson Road United Church. Since 1986, it has been the Christian Life Church. 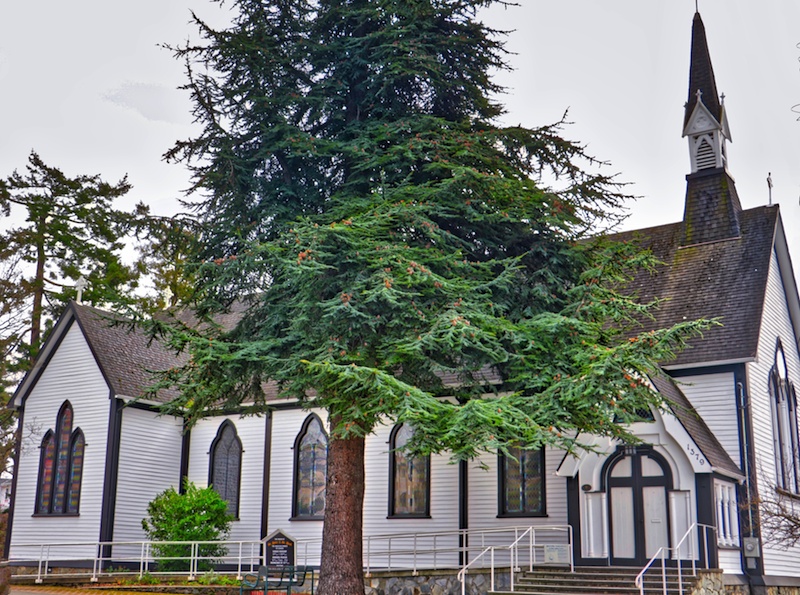 The first services in St. Paul’s church were held by Royal Naval Chaplains at the medical station set up in Esquimalt during the Crimean War (1854-1856). With the building of the village school in 1858 the small congregation held Sunday services there. But all wanted their own church, and by the grace of God and the hard work of Paymaster Sidney J. Spark, R.N., of H.M. Shipyard and others, the church was built on the shores of Esquimalt harbour just below Signal hill.

The church was consecrated on December 12, 1866 and was called St. Paul’s Naval Church.

In 1904 the Government of Canada decided that the property on which the church stood was needed for other purposes, so the church was dismantled and moved to its present location. 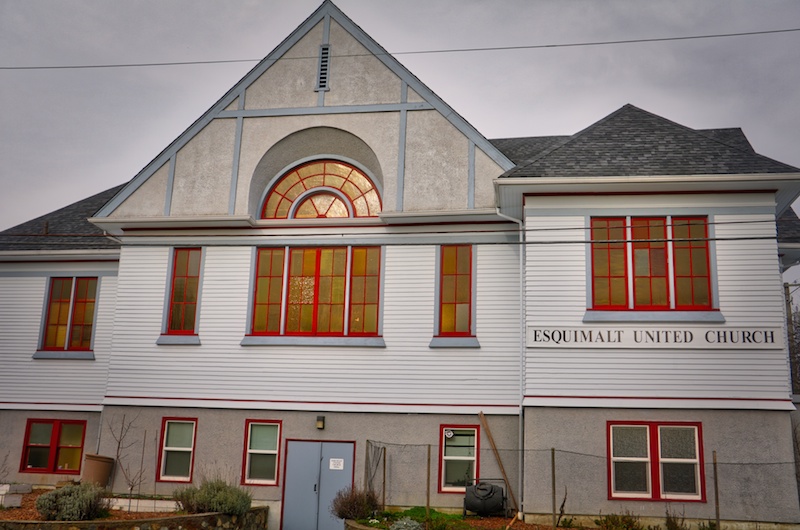 In 1911, a meeting was called to organize a Methodist Church in the Esquimalt District. One week later a church service was held in the Soldiers and Sailors Home, now known as the Tudor House. Church services continued in a hall and in February, 1912 it was decided to purchase property on the corner of Lyall Street and Admirals Road for a new church to be built. The Methodist Esquimalt Naval and Military Church opened on September 11th, 1913.

In 1925 the congregation decided to join the United Church of Canada. The church remained a Naval and Military Church serving both the civilian and the military communities.

Between 1930 to 1933 ministry was shared with James Bay United Church and from 1933 to 1954 the church was served by Supply Ministers. A Full Time Ministry began in 1954 and continues to the present.

Our current activities include Sunday worship at 10:30 a.m. , monthly Taizé services at 6 p.m. on the second Friday of the month, the garden project, Children’s Church and study groups. 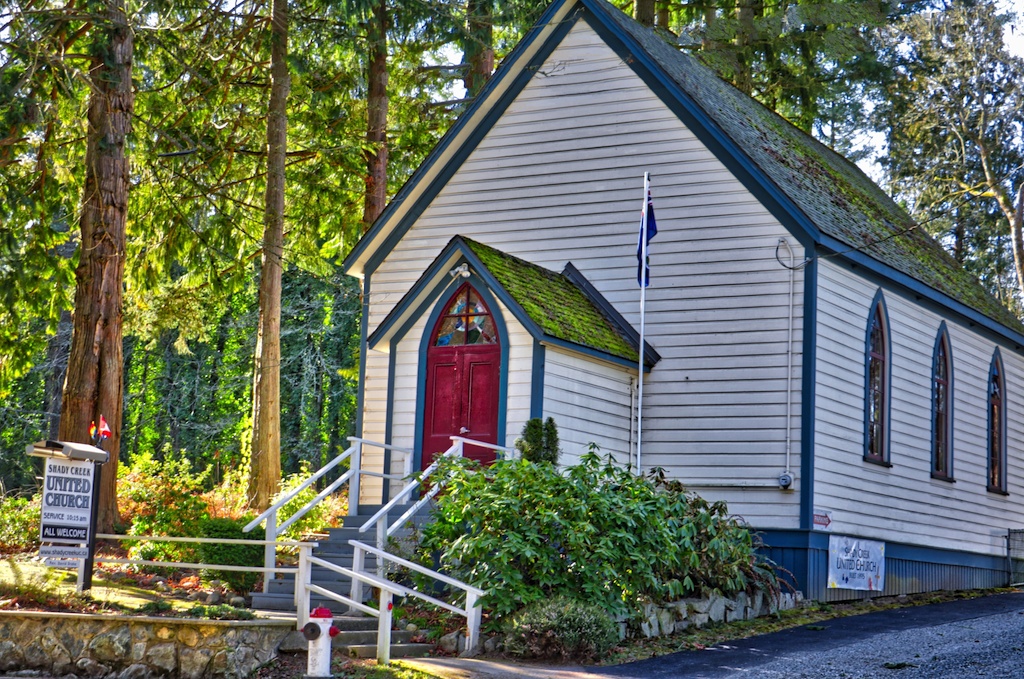 This story begins in 1858 when a group of settlers arrived in Victoria aboard the steamer “Oregon” from what was then the bustling mining town of San Francisco, California. Significantly, the new settlers included a number of black families, a part of the immigration of about 700 black settlers who came to western Canada around that time at the invitation of Governor Douglas.

One of the black families on board was that of Charles Alexander. He was originally from St. Louis, Missouri, where he had been born in 1824. His wife, Nancy, also from St. Louis, was ten years younger than Charles.  On arrival in Victoria, a number of the families decided to settle on the Saanich Peninsula and, in 1858, the Alexander family was one of that group. They moved out to what was later to become “Shady Creek” in 1861. 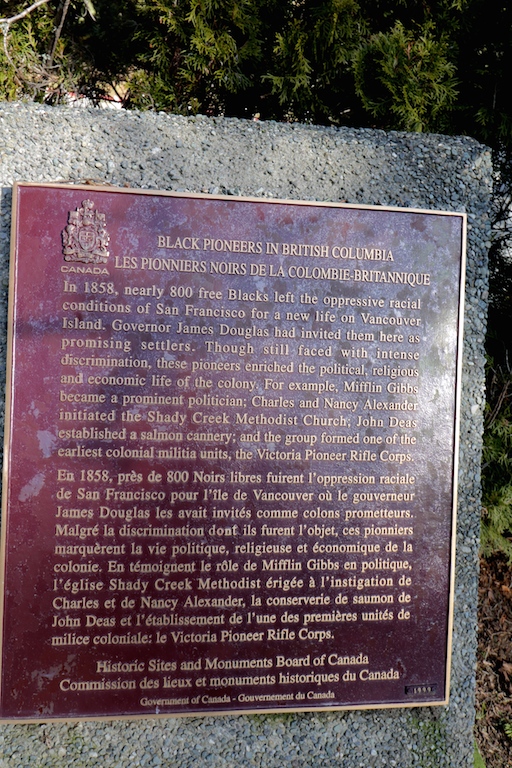 The new settlers soon decided that a church was needed.  By 1862 it was determined that a building for that purpose would be constructed near the Old East Saanich Road on Jesse McMillan’s farm, later the Jack Patterson farm.  Jesse McMillan had arrived in the Victoria area in 1863 and is listed on the South Saanich voters list from 1875 – 82. He grew tobacco on his farm from seeds brought from the southern USA. His South Saanich farm also became the location for popular Dominion Day picnics. He is buried in Shady Creek Cemetery.

James Bay United Church, planted from the seeds of a Methodist Sunday School, has been a spiritual home for people in the neighbourhood and beyond for more than 120 years.

In that time the vitality of the congregation has ebbed and flowed. Just when the church was on the verge of closing, there was a great surge of life in the late 1960’s to mid 70’s, a  time of extra-ordinary contribution to the well-being of the neighbourhood. 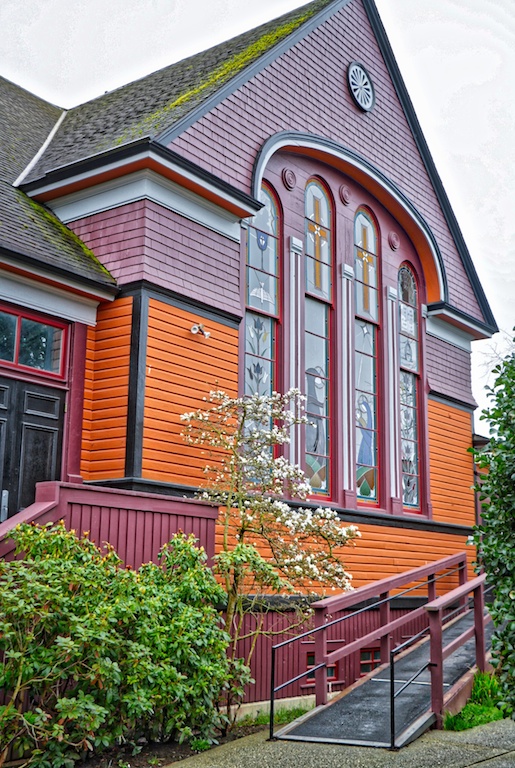