For a unique biking or walking experience, I suggest you drive up to see the amazing century old Kinsol Trestle which is now part of the Trans Canada Trail.  It’s about an hour’s drive up the beautiful Malahat (Hwy #1) to the parking lot.  (See below for directions)

It stands 44 metres high and is 187 metres long … this makes it one of the largest wooden trestles in the world!

Since it was a rail line, the trails are all flat and either gravel or a combination of gravel and dirt, making it an easy walk or ride – and wheel chair accessable! 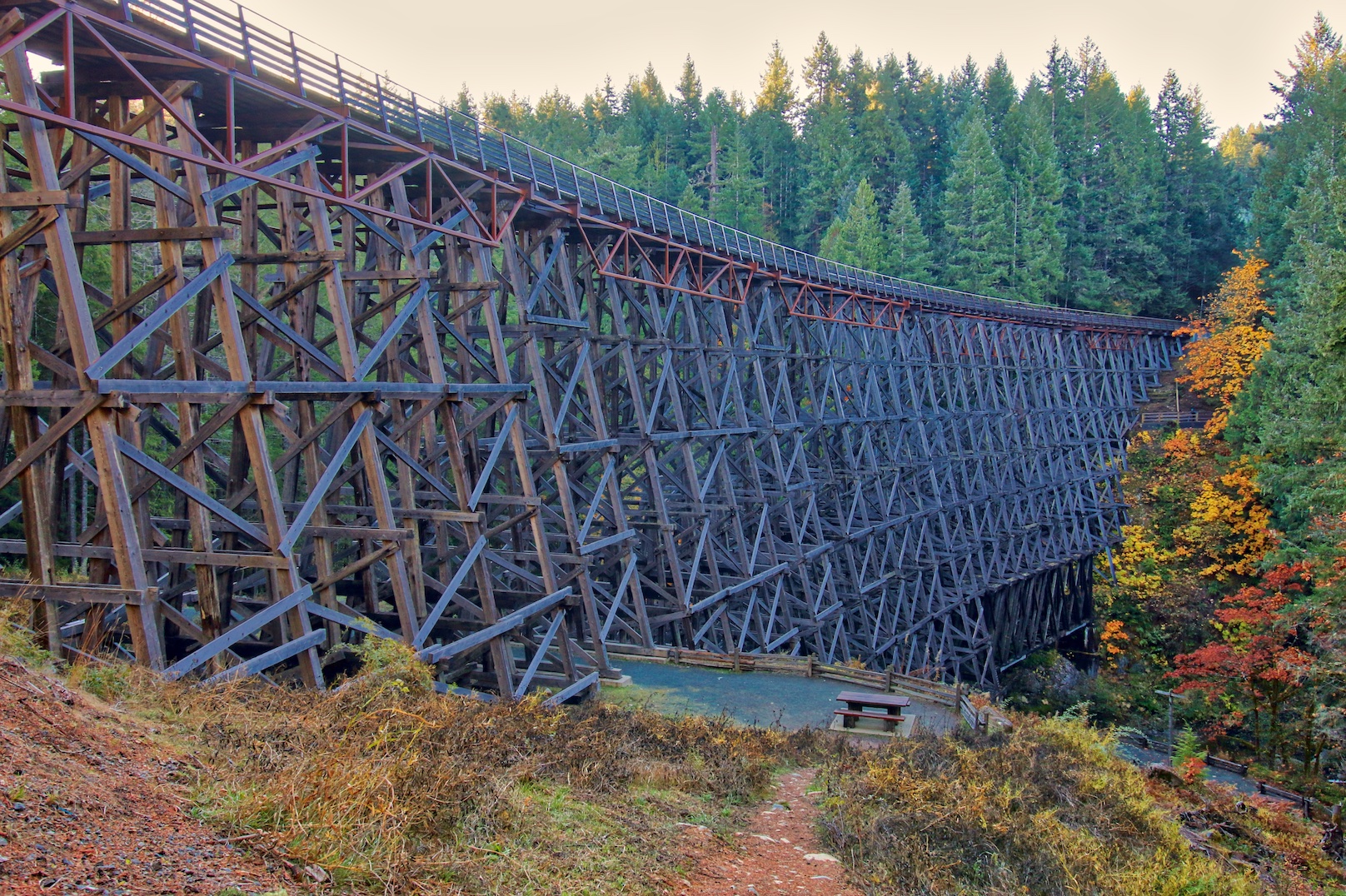 It was built as part of a plan to connect Victoria to Nootka Sound, passing through Cowichan Lake and Port Alberni, when forestry had gained some ground on Vancouver Island and a more efficient way to transport the region’s huge, old-growth timber was needed. It was not built, as some mistakenly believe, to serve any nearby mines. It was named after the nearby Kinsol Station which, in turn, took its name from a nearby mining venture grandiosely named “King Solomon Mines”, a very small mining venture that produced hardly enough to fill 3 rail cars over the period 1904-1907 . 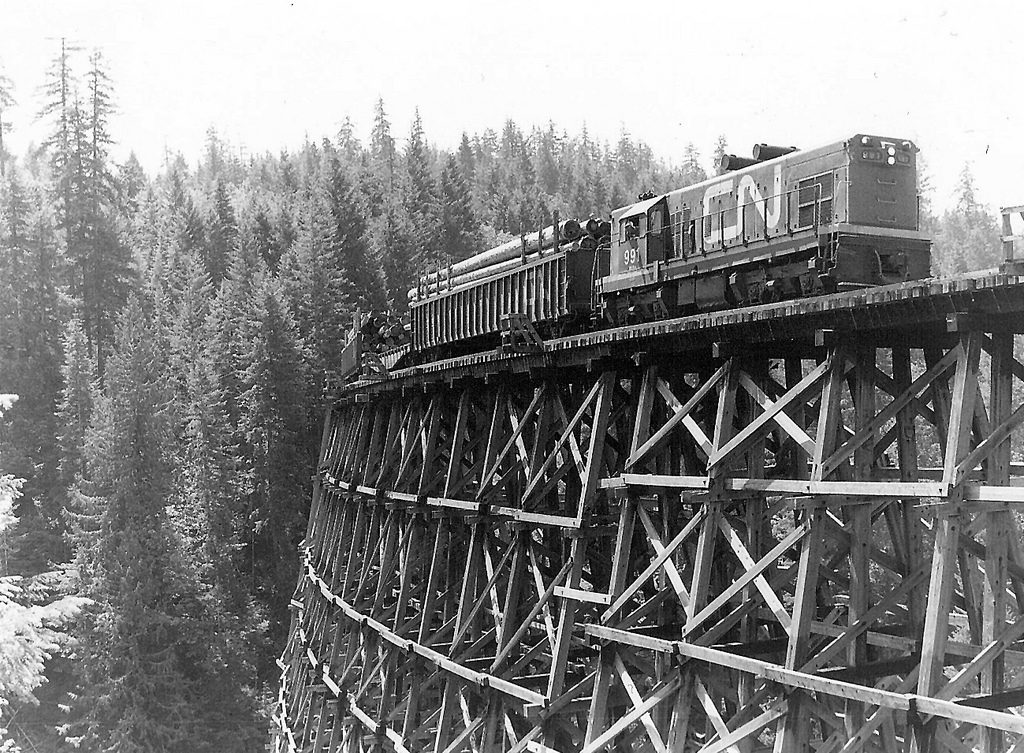 The line was started in 1911 by the Canadian Northern Pacific Railway (CNoPR) and while it was designed by engineers, it was built by local farmers and loggers, with investment funds from the Canadian Western Lumber Company, which was the largest lumber company in the world at that time. The trestle was never completed by the CNoPR, and the line only reached Youbou before construction was terminated. The CNoPR was taken over by Canadian National Railways in 1918, and its line and the trestle were completed in 1920 as part of the “Galloping Goose” rail line. The last train to cross the Kinsol was in 1979, and the trestle was abandoned 1 year later.

Finally, after years of campaigns to save the trestle, rehabilitation work began in 2010. The official reopening of the trestle was July 28, 2011. 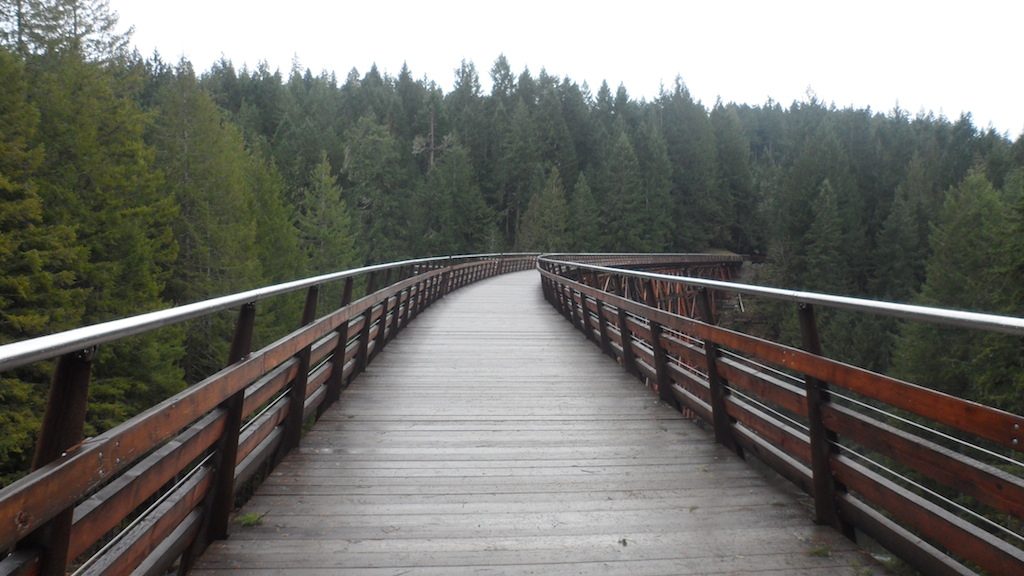 How to Get There – By Vehicle

Public vehicle access to the Kinsol is from Shawnigan Lake through to the south end of the trestle.

From Nanaimo: Drive south of Duncan on the Trans-Canada Highway and turn west (right) onto Cobble Hill/Shawnigan Lake Road and follow it all the way to Shawnigan Lake. Turn right onto Renfrew Road and follow the road past the end of the lake to Glen eagles Road and turn right. There is a public parking area about 550 metres down the road on the right side.