Sidney Spit National Park Reserve is located on Sidney Island, just east of the town of Sidney, BC 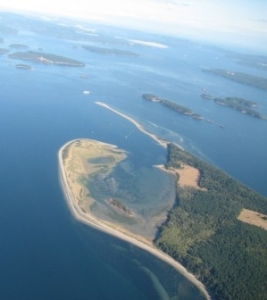 Backed by towering bluffs, its tidal flats and salt marshes teem with birds and marine life. Located on the edge of the Pacific flyway, the island attracts large numbers of shorebirds during the spring and fall migrations. The inner lagoon, hook spit and the vegetated centre of the main spit are particularly sensitive ecosystems. To protect them, land access is limited to a narrow strip along the outer edge of the hook spit, and visitors should keep to the sand edges of the main spit. Boats (including kayaks) are prohibited from the lagoon. On the northwest side of the island was a large First Nations settlement as well as campsites and places of cultural and spiritual significance. They fished in this entire area year-round, and shellfish, medicines, berries and plants were harvested on the island.

In years past, the island has been farmed and also seen industrial development: between 1906 and 1915, the Sidney Tile and Brick Company operated on the island. Broken red bricks abound on the shoreline and in the underbrush, and remnant works can be seen in the camping area.

To reach Sidney Spit, drive north on the Pat Bay Hwy (#17) to the town of Sidney.  Turn right onto Beacon Avenue and continue to the end of the road and you’ll see the pier.  There are parking lots nearby. 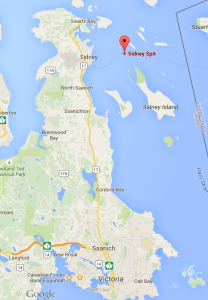