The Harling Point Chinese cemetery is a beautiful, serene bit of history tucked away in Oak Bay. 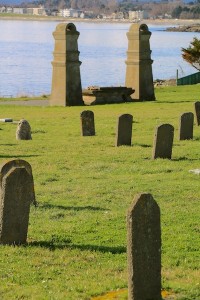 Mass graves, a brooding figure of native legend and a misfit of a neighbourhood make the Chinese Cemetery a place of eerie, isolated repose.

Tucked into Oak Bay at Harling Point, below the point where Crescent Road becomes King George Terrace, the Chinese Cemetery is easily missed by motorists and passersby along the waterfront.

It’s named for the hundreds of Chinese immigrants whose remains have been interred there.

Originally barred from other Canadian resting places by discriminatory policies, they couldn’t even be returned to China because of the cataclysms of the Second World War and Maoist revolution.

Surrounding the cemetery is an oddity of a residential neighbourhood — almost as if somebody decided to transplant a piece of Vic West or Fernwood behind the Tweed Curtain of Oak Bay.

Lots here are as small as Oak Bay municipal regulations allow. Homes are shoehorned into narrow lots. Quirky clearly wins out over stately.

Overlooking the Harling Point neighbourhood and cemetery is the monolithic Harpooner 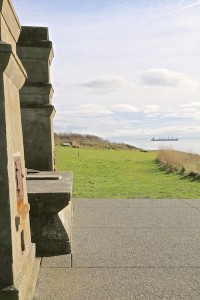 Songhees storytellers say Harpooner Rock was once a seal hunter who was transformed into stone after angering certain spirits.

Jean Sparks, an Oak Bay volunteer archivist, likes to sit by Harpooner’s Rock when she visits the Chinese Cemetery, a special spot for her.

She noted the Chinese community, forbidden from using municipal burial spots and forced to purchase their own cemetery, selected Harling Point in 1903 for its special formations.

The shape of the surrounding landscape and the sea made for unique feng shui, a near-spiritual alignment of geographic formation.

“I truly do believe it is quite a mystical place and it has a special feel to it,” Sparks said.

The conjunction of funky neighbourhood and cemetery makes for a harmonic meeting place of misfits.

The houses were constructed on land considered by builders of the late 19th and early 20th centuries to be too low and exposed to the ocean to be desirable. It was just too cold and damp.

And there were always tales of it being haunted, a place where kids would go to prove their bravery at Halloween and “a magnet for teenagers.” 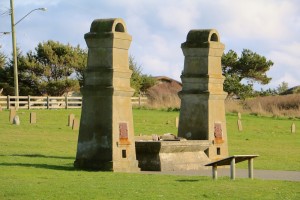 “We just went there because you could play dare,” said Sparks. “You would go there as kids on your bike after dark and then you were being really daring.”

Sparks said she was well into adulthood before she learned the area is actually part of Oak Bay. She had always assumed it was in Fairfield.

The Chinese Cemetery is a kind of misfits’ resting place of its own. The 13 mass graves hold the remains of as many as 900 Chinese immigrants who were not originally intended for burial anywhere in Canada, let alone Harling Point.

Originally, the bodies were buried across Canada in accordance with traditional Chinese practices.

After seven years, they were disinterred. Bones were cleaned up and the remains packaged to be shipped back to China for eventual burial in the immigrants’ ancestral home villages.

The Chinese Cemetery housed a building locally dubbed “the bone house,” which served as a way station for those remains on their way back to China.

But the Japanese invasion of China in 1937 and the Chinese Communist revolution in 1949 forced an end to the shipments, and the remains stayed in Victoria.

According to the Old Cemeteries Society of Canada, the bones were in storage in Victoria until 1961, when they were interred in the 13 mass graves on the site now marked by flat, horizontal marker stones.

Harpooner’s Rock of Songhees legend is a misfit of an older, geological kind.

The rock itself is what geologists call a “glacial erratic.”

It was deposited by an ice age glacier and is of a different type than the rocks on the Harling Point beach where it now rests.

With all of its quirks and history and the legends that surround it, it’s understandable the area was at the centre of a 2003 National Film Board documentary, called From Harling Point.

The film traces the history of the Chinese cemetery, from “controversy and neglect to its revival as a National Heritage site.”

In its synopsis, the NFB calls the site a metaphor for Canada, “a country still working to make a home for all who live within its borders.”

photos from:  Visitor in Victoria