Home/Castles & Historical Places, Hotels/Motels, WHERE TO EAT/DRINK, WHERE TO STAY/EMPRESS HOTEL

(most commonly known as The Empress) is one of the oldest and most famous hotels in Victoria, British Columbia, Canada.

Located on Government Street facing the Inner Harbour, the Empress has become an iconic symbol for the city itself. It has been designated a National Historic Site of Canada due to its national significance.

Located at the southern end of Downtown Victoria on Government Street, the hotel is situated close to the British Columbia Parliament Buildings. The hotel is also situated closely to the city’s Inner Harbour, a major tourist attraction located west of the hotel, across Government Street. Other major attractions located adjacent to the hotel include the Maritime Museum of British Columbia and the Victoria Bug Zoo, both located north of the hotel, across Humboldt Street. 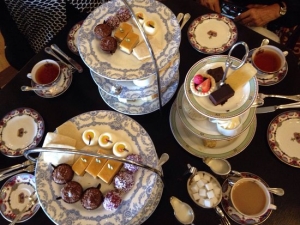 Served daily since its opening in 1908, world famous Tea at the Empress is served in the sophisticated Lobby Lounge. Located on the picturesque West Coast of Canada, Fairmont Empress is the ideal starting point to explore the stunning natural beauty of Vancouver Island.

DINING AT THE EMPRESS

Victoria’s top Pacific Northwest cuisine is found right here at Q at the Empress. For more casual dining and the best martini on the Island, experience Q Bar.

Q at the Empress, located in the most storied room in Victoria, is a must-visit culinary experience. This atmospheric space has a fresh contemporary feel, all the while staying true to the building’s unique iconic heritage. Rich cherry wood ceilings and spectacularly detailed moldings honor the past, while the finishes bring a modern twist to the room.