One of Victoria’s ‘hidden gems’ …

Government House is the seat of the Lieutenant Governer of British Columbia, The Honorable Janet Austin, OBC.

Government House is the office and official residence of the Lieutenant Governor and the ceremonial home of all British Columbians. The house is located on the traditional territory of the Songhees and Esquimalt First Nations, in the heart of the Rockland neighbourhood in Victoria, British Columbia.

The Government House grounds are open from dawn to dusk, 365 days a year. The grounds and gardens are free to visit.

As the House itself is both a working office and private residence, it is only open to the public at certain times. Guided public tours are offered one Saturday a month. Tours of Government House are also available to school groups and non-profit groups by advanced booking. 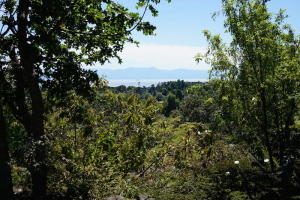 View to the Olympic Peninsula from path at Gov’t House

The gardens, statues and artwork are all attended by volunteers – Friends of the Government HouseGardens Society, who would maintain the gardens, raise funds and ensure the continuation of interest and support of the grounds. 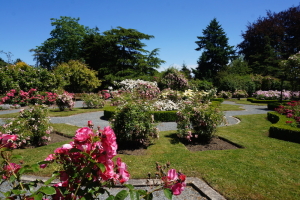 The grounds around Government House are some of the most beautiful gardens in Victoria!  There are numerous paths to stroll and enjoy the views to the Olympic Peninsula.  Be sure to check out the rose garden – just heavenly!

The Cary Mews at Government House 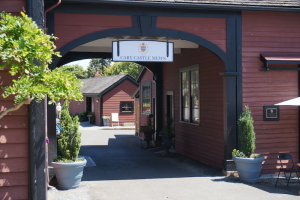 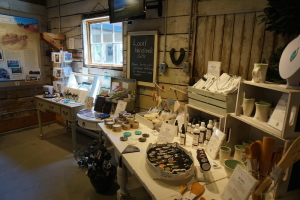 RUDI’S TEA ROOM
The Tea Room is located in Butterworth Cottage and offers a chance for visitors to enjoy lunch, tea, pastries and other refreshments. Featuring daily soups, sandwiches, quiche and other delectable treats made by the Executive Chef at Government House, it’s the perfect place for lunch, afternoon tea or refreshment during a walk around the Mews and gardens.

The Tea House is open seasonally from May through August, and will open this year on May 31st and remain open until September 1st. Please note that this year the Tea House will be open on Tuesdays, Wednesdays and Thursdays from 11 to 3 and will only be open for take out due to the ongoing pandemic. 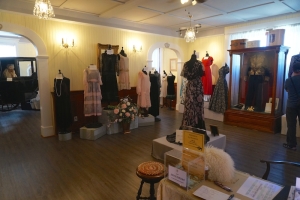 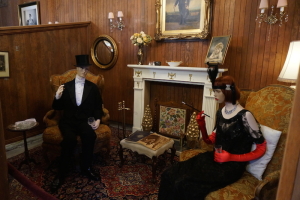 A room in the expanded Costume Museum

The newly expanded Costume Museum is located in the Carriage House and showcases a large variety of period pieces. From former Lieutenant Governors’ uniforms and Chatelaines’ dresses to an original butler’s uniform, the Museum takes visitors on a sartorial journey through the history of the Estate and Office of the Lieutenant Governor. These historical artifacts are from both the Government House collection and thanks to the generosity of several donors. Visitors to the Costume Museum will also see the historic Landau Carriage on display. In 1901, the Landau was used by the Duke and Duchess of York and Cornwall (later King George V and Queen Mary) on their tour of Victoria and Esquimalt.

The Cary Castle Mews is also home to the Lawrence J. Patten Heraldry Exhibit. This display was created by the British Columbia branch of the Royal Heraldry Society of Canada, whose mission is to promote heraldry, particularly Canadian heraldry, and to encourage an interest in the subject among Canadians. Visitors have the opportunity to learn about the history, design, colour and language of heraldry and view examples of heraldic shields.

Government House is located at 1401 Rockland Avenue in Victoria, British Columbia. It is a 20-minute walk or a five-minute drive from downtown. Free parking is available onsite. Buses on Victoria Regional Transit routes 11 and 14 stop on Fort Street at Joan Crescent, three blocks from Government House.