Home/Day Trips, Longer Trips, WHAT TO DO/ADVENTURES ON MAYNE ISLAND

Exploring Mayne Island – What to see, What to do.

If you have traveled to Vancouver Island on the BC Ferries, you will have passed Mayne Island on your way through the spectacularly scenic Active Pass. It is the island on the left, the one with the Active Pass Light house on Georgina Point. If you have the time during your stay and want to visit some of the smaller Gulf Islands to experience what life on these small islands is all about, this island is a good choice. Mayne is also BC Ferries Gulf Island hub and while the terminal can be crazy busy as vehicles are rerouted to other destinations on the islands and mainland,  you will find that the rest of the island is quiet and serene with some nice amenities and lots of interesting places to explore.

Mayne Island is not big, about 21 square kms (8.1 sq mi) and there are a fair number of paved roads crossing and circling the island for exploration.

Some of the key recreational areas you will want to visit are:

Campbell Point is part of the Gulf Islands National Park Reserve and sits along Georgia Straight and Bennett Bay.  Bennett Bay has one of the nicest sandy beaches on the island. On clear days you will have spectacular views of Mount Baker on the mainland. A relatively flat 2-2.5 km hiking trail takes you through a nice forested trail to a point with a beach lookout. 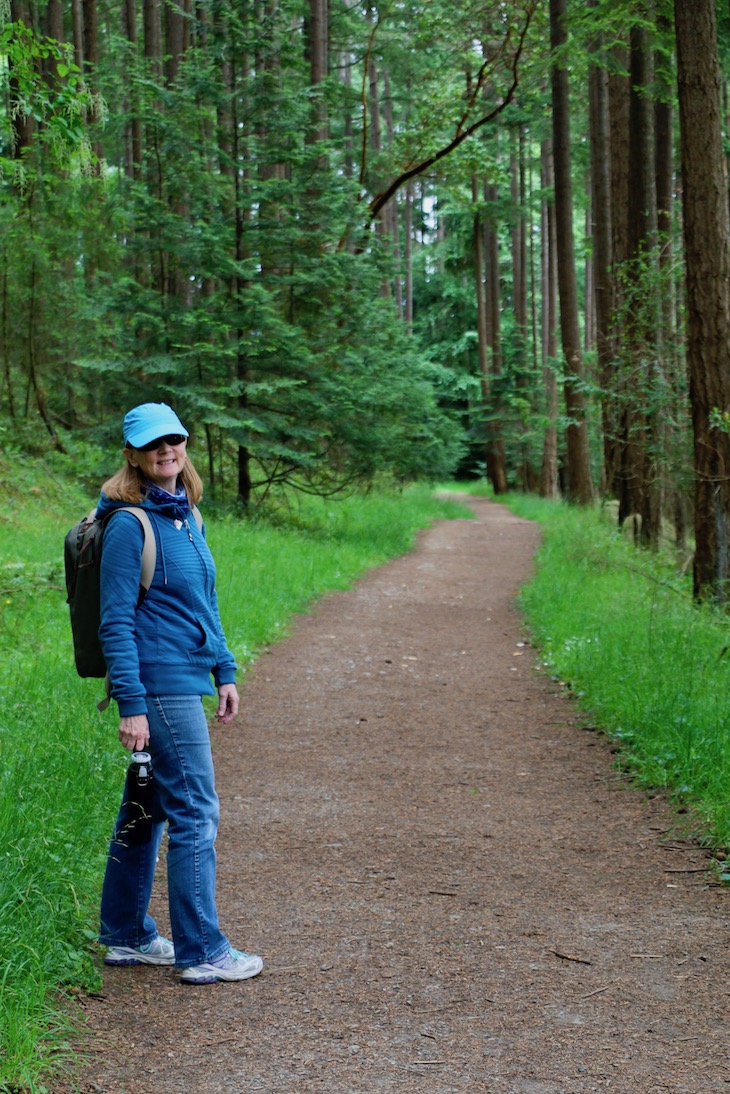 The trail to Campbell Pt 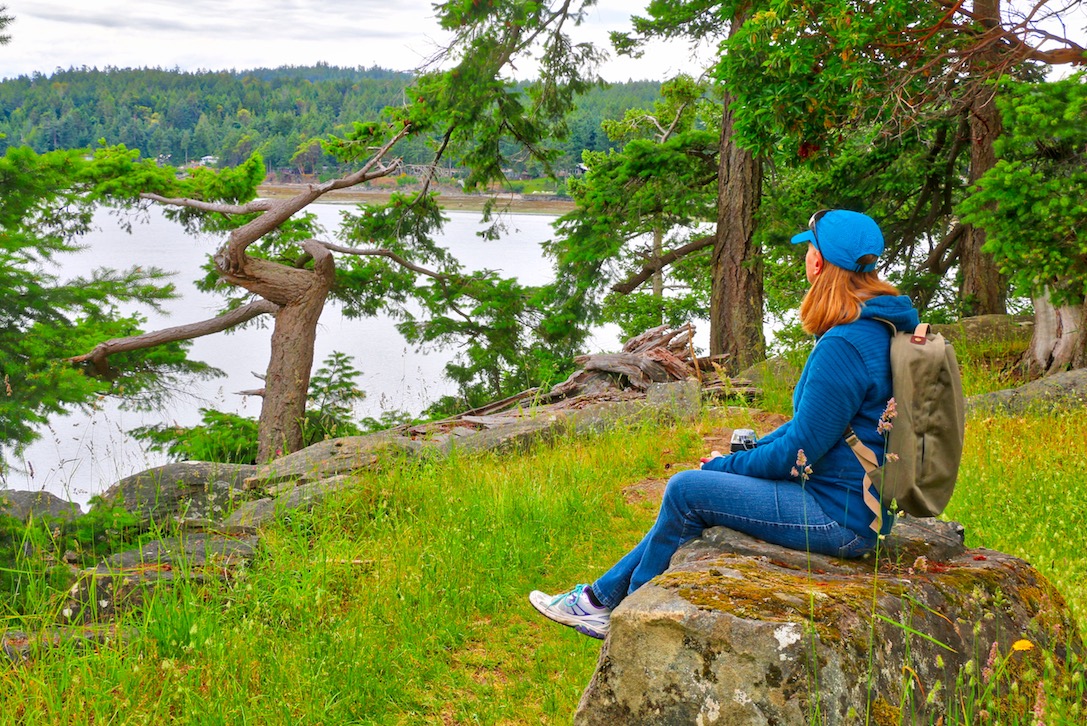 Looking back at Bennett Bay from the Campbell Pt Trail 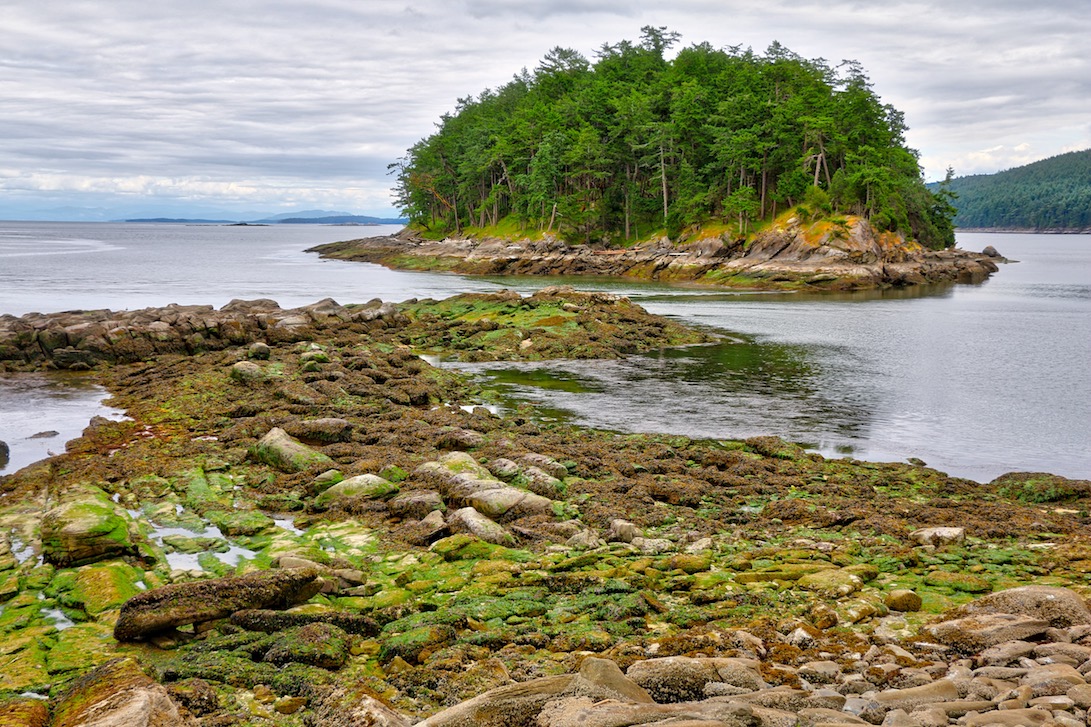 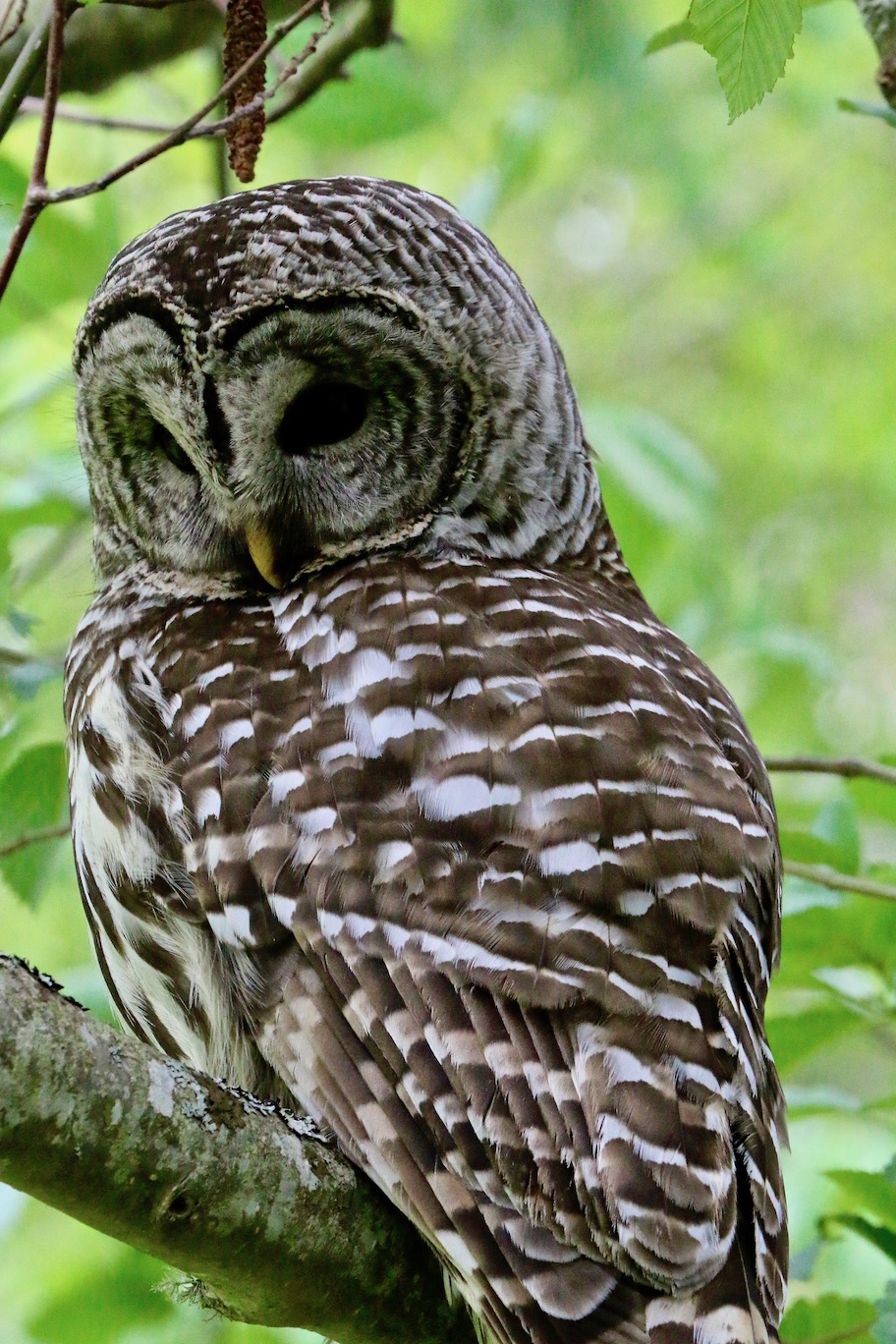 A Barred owl at Campbell Pt

Georgina Point is also part of the Gulf Islands National Park Reserve and contains the historical Active Pass Lighthouse.  The lighthouse was built in 1885 to warn ships of the reefs, rough waters and currents at the entrance of Active Pass and Georgia Strait. The park is open daily to the public. This historic lighthouse has now been automated and the headland it sits on is a wonderful spot to explore, have a picnic and watch the ferries and other boat traffic running through Active Pass. If you’re lucky you may even see a pod of Orca’s moving through the pass.

A small but very pleasant regional park with a woodland trail that winds through a forest of western red cedar and red alder, huge Arbutus trees, giant sword ferns and Oregon Grape. 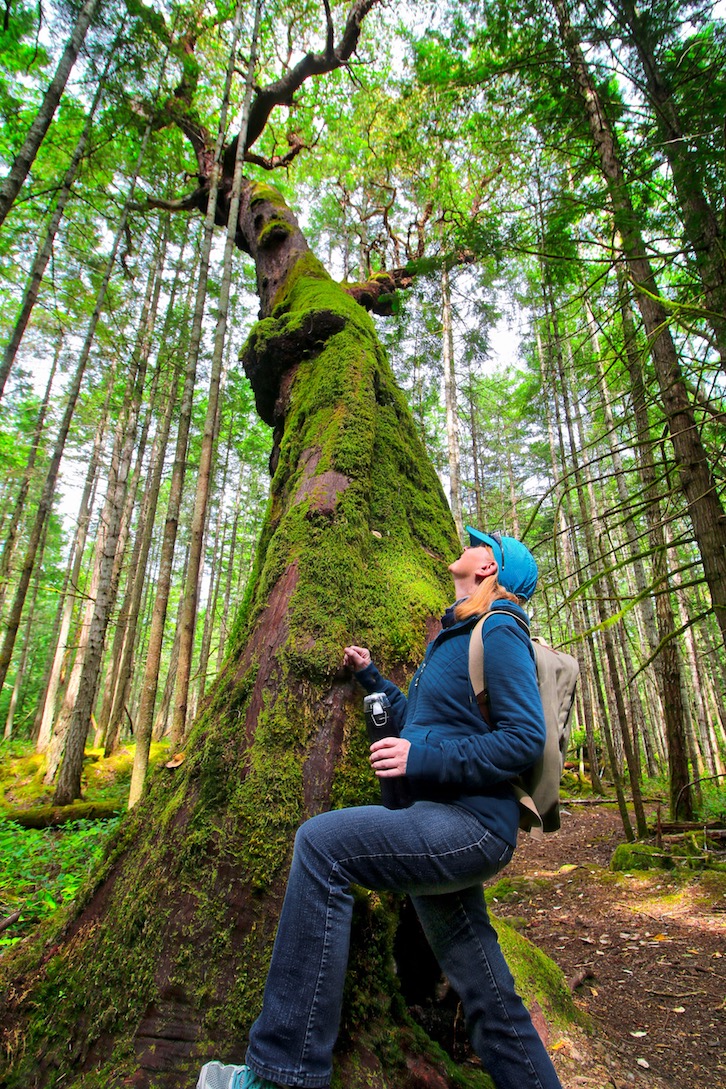 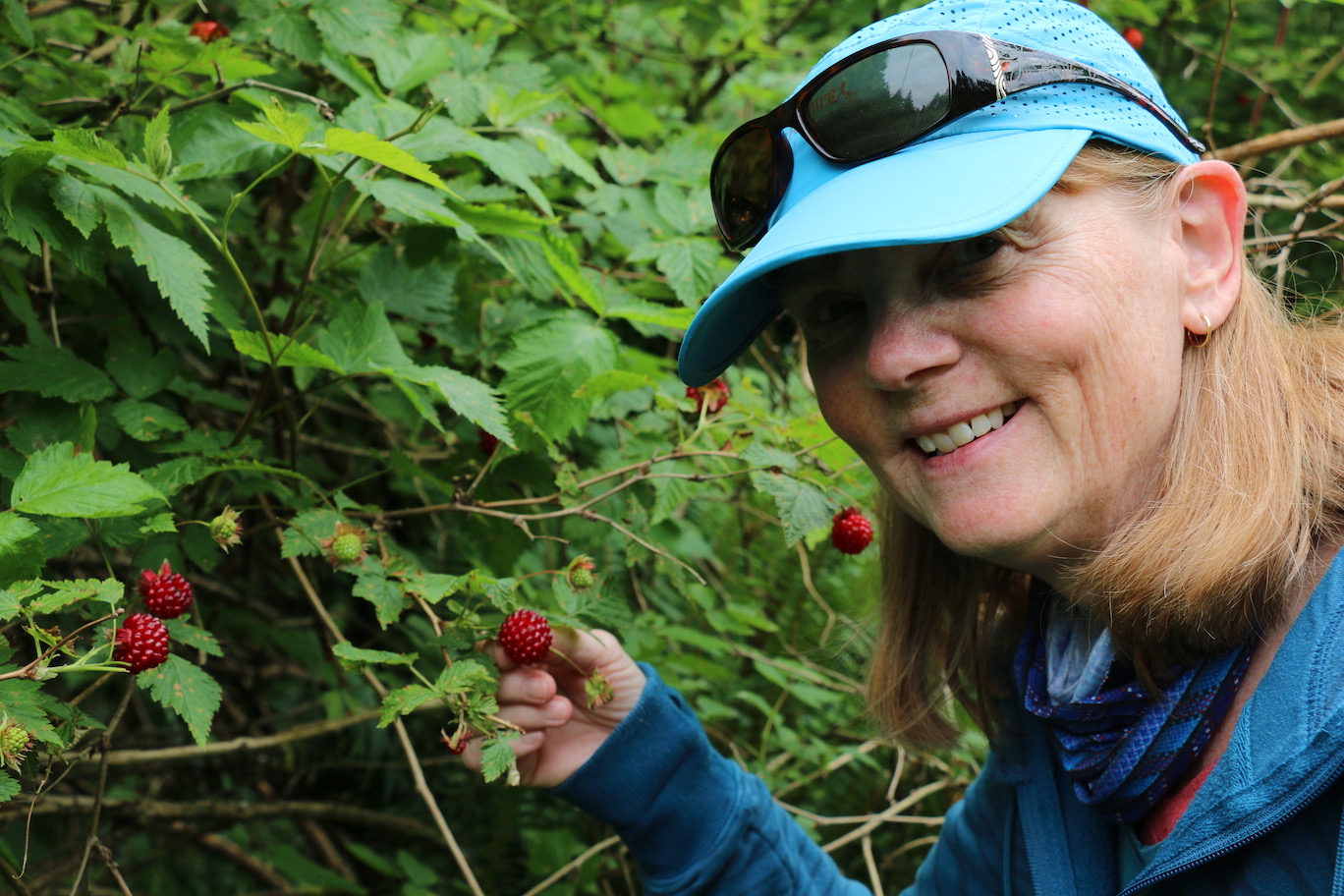 This park consists of a small green space and a large public dock on Miner’s Bay facing Active Pass and right near the village.  The docks are  a busy terminus for transport vessels, water taxis and float planes coming to the island.  Active Pass is the shortest route for vessels sailing to and from Victoria from the mainland and  Minor’s Bay is the mid point of the journey.  This also made it the perfect spot for Vancouver Island miners to gather before rowing across Georgia Strait to the mainland during the Fraser Canyon Gold Rush of 1858-1860 and hence the name, Miner’s Bay. 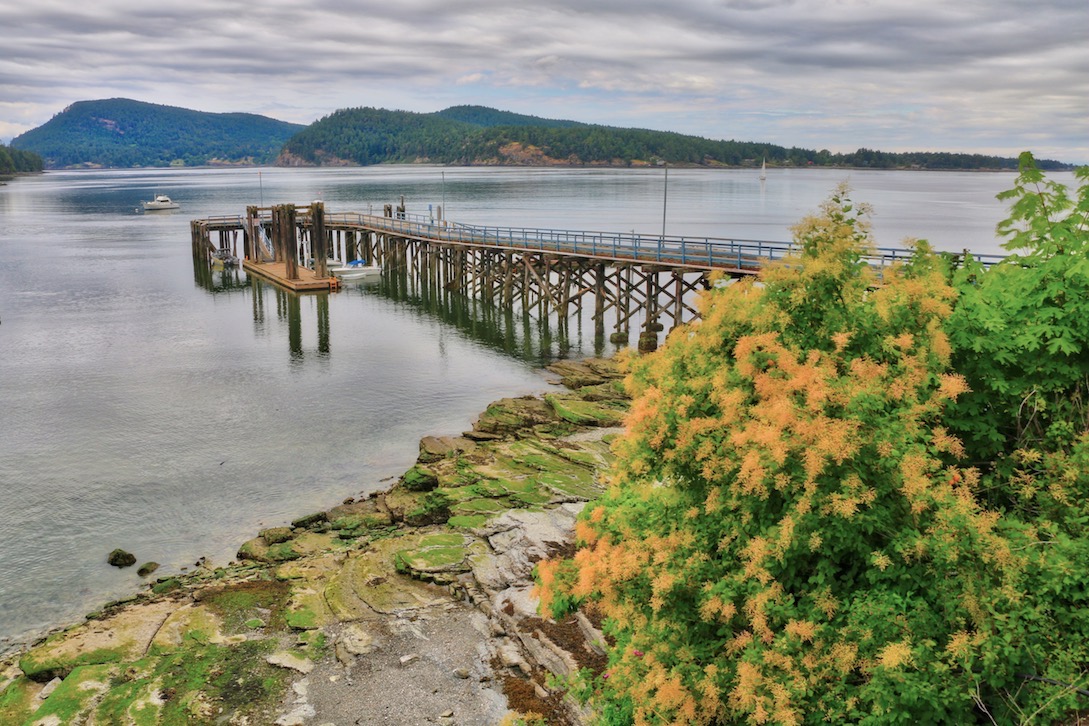 This garden  was created commemorate the Japanese who had worked and settled on Mayne Island beginning in 1903 when the first settlers launched successful tomato and cucumber greenhouse operations.  Sadly these businesses ended abruptly in 1942 when the government shipped the Japanese residents off to internment camps. The Gardens are peaceful, quiet, and well-cared for with ponds and streams running through. There are some historical informational placards explaining the history of the area including a replica of a Japanese charcoal kiln which were used to provided charcoal to the fish canneries on the Fraser River in the early 1900’s. The Japanese Gardens are well worth a visit from wherever you are on the Island.

This is a brand new regional park, which is being created by a joint venture of between local residents, who raised $2.1 million, and with support of the CRD (Capital Regional District) were able to purchase the land.  The park encompasses 26 hectares that make up St. John Point on the southeast tip of Mayne Island.  Mayne residents have informally used the trails around the point for years.

There are three resorts on the island, Springwater Lodge on Miner’s bay and The Mayne Island Resort and the Blue Vista Resort, both on Bennett Bay. There is a bit of history associated with Springwater Lodge as it is the oldest continuously operated hotel in British Columbia.  The Springwater was originally built as a private home in 1892. There are also   a number of cottages and B&B’s on the island. For a complete list of accomodations click this link: Mayne Island Accomodations

There is only one campground on Mayne Island and it is a private campground with 12 walk-in waterfront and forest campsites.  The campground is situated on 22 secluded acres of pristine forest and pebble beach.  They offer a tree shower, a 60sq ft wharf for fishing or sun-bathing, a buoy for mooring boats, a boat launch and is fairly close to the ferry and services for cyclists, hikers, or drivers.  Mayne Island Camping

There are few restaurants on the island, Springwater Lodge, The Sunny Mayne Bakery and The Groove Island Kitchen (temp. closed) are located in the Village.  Bennett Bay Bistro is located on Bennett Bay on the opposite side of the Island, which is only about a 5 minute drive away.  Not all of the restaurants are open year round, so you may want to check their websites before you go if you are traveling in the off season. 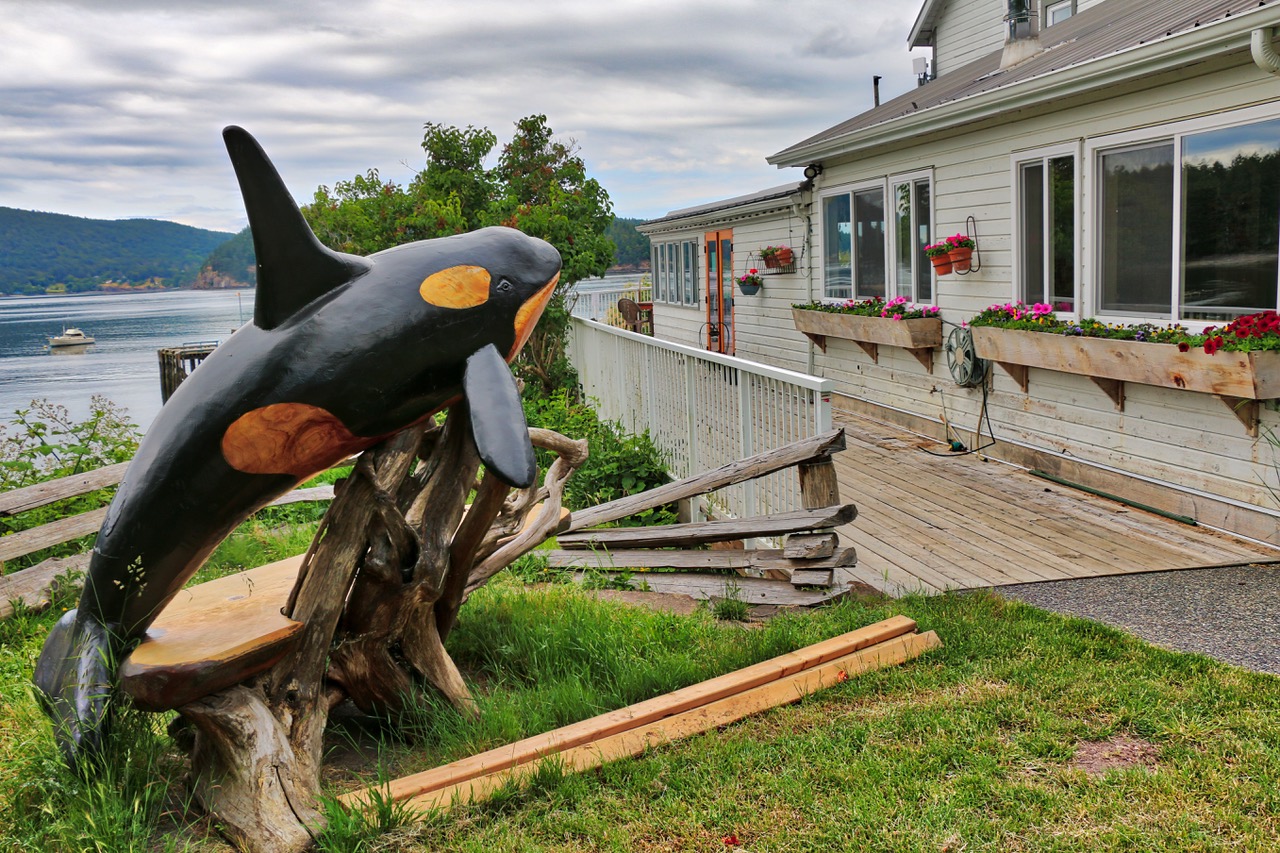 You will find a number of Artisans, shops, galleries including a hardware store and a grocery store. For a more complete list of shopping click this link: Mayne Island Shopping