The National Toy Museum of Canada specializes in the preservation and history of old toys.

Taken from an article by CBC News:

Co-owner B. Woodward says the point of his new museum is to take people on a trip down memory lane with the toys of their childhood.

Woodward, who also owns collectible toy store Cherry Bomb, started the museum with his wife because he saw Victoria’s downtown losing too many of its attractions.

“We’ve lost Undersea Gardens, we’ve lost the wax museum, we’ve lost businesses like Tony’s Trick and Joke Shop,” he said. “We had this space upstairs, and we said, let’s convert it [to a museum].”

Woodward says he wants the museum to be a fun spot, but also a place of education about how standards of toy safety have changed over the years and also how the way toys represent reality has changed. 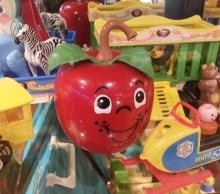 “The oldest piece we have in here is 1920s Meccano … it was metal, screws. You go by Canadian standards now:  [And] it’s a no no no. It’s too sharp!  It’s too many small pieces! Too chokeable!” he said.

Woodward has been growing the collection from selected pieces he sells at Cherry Bomb and has also accepted donations from local collectors.

Over time, he says his goal is to do special exhibits of certain types of toys — for example, a Star Wars exhibit when the next installment of that franchise is released.

With files from Robyn Burns

The museum is by donation and all funds go back into the non-profit organization. People also have the opportunity to loan their toys to be put on display at the museum.