While you’re in Victoria, you should definitely think about exploring some of the Gulf Islands.  If you want a quiet, outdoorsy get away, Saturna Island is probably your choice.  With a population of only 350 full time residents, spectacular shoreline features, mountainous terrain and two thirds of the island incorporated into the Gulf Islands National Park Reserve it is idealic.  Saturna Island has lots of outdoor activities, including kayaking, biking, hiking, swimming and boating and some good basic amenities including accommodations, pub, cafe, and a general store.

How to get there

Unless you have your own boat, BC Ferries is the easiest & only way to get to Saturna Island.  Either walk on or take you car.  Depending on the ferry sailing you choose,  it is approximately 1 1/2 hours from Swartz Bay on Vancouver Island to Saturna.  You can also get there from the Tsawwassen terminal on the Vancouver mainland.  For BC Ferries Schedules, click this link:  BC Ferries.  Make sure you plan your trip and check the schedules carefully, as the the schedule to some of the Gulf Islands, like Saturna, is not as regular as the mainland ferries. 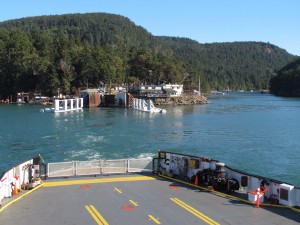 BC Ferry Terminal at Lyall Harbour, Saturna Island, BC

The Saturna General Store offers most of the grocery items you may need including alcohol. The owner/chef also makes up some tasty sandwich’s and wraps, and on Fridays and Saturday’s offers sit-down meals in the attached café.  These dinner nights are popular so make sure you call ahead for reservations!  For some really good food and a pint (or 2) of local beer, you probably will want to hit the Saturna Lighthouse Pub situated right on the waterfront by the ferry dock. You won’t want to miss the spectacular sunsets to be seen both from inside or sitting on the deck!

Enjoying the sunset from the deck at the Saturna LIghthouse Pub 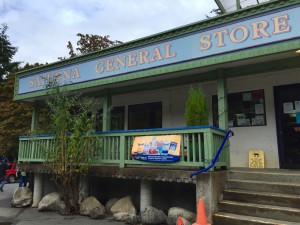 There are a number of B&B’s on the island, but we stayed at Saturna Lodge, a casually elegant lodge looking over Boot Cove, just minutes from the ferry dock. The lodge began as a Mill Manager’s home in the 1920’s and has been enlarged and renovated into its present day form with 6 rooms. Three rooms have water-views, a balcony or a patio. You will be warmly welcomed by host/owner Laura and your stay includes a complimentary gourmet breakfast which you pre-order the night before. You can order anything including their awesome breakfast bar which includes a fresh scone, boiled egg and selection of cereals and fresh fruit, yogurt and more, to traditional bacon and eggs, to pancakes with a berry compote and whipped cream to eggs benny…delightful!! While you’re there wander their beautiful gardens and take a dip in the secluded hot tub under the trees.   The lodge is pet friendly too! 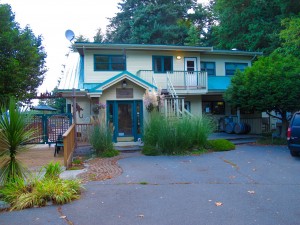 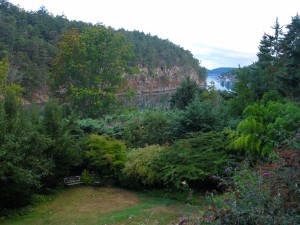 Saturna Lodge Gardens, with Boot Bay in the background

Saturna is a paddlers paradise.  If you have your own boat or have the ability to transport rental kayaks, good launch points include Winter Cove, Russell Reef (on East Point Road), Fiddlers Cove and Saturna Beach. Day-trippers can head for Tumbo Island with its walking trail, and marsh. Overnighters can utilize the Gulf Islands National Park campsites on nearby Cabbage Island, or the sites overlooking Narvaez Bay.

If you want to explore by bike, Saturna is awesome. While there are a few hills to negotiate, the roads are beautiful and the traffic light. If you don’t bring you own bike you can rent one from Saturna Cycle located at the Saturna Point Store. They also offer a bicycle repair service if you have problems with your own bike.

Winter Cove Park is the most accessible, family friendly spot on the island with lots of picnic tables.  Russell Reef is close by at the Winter Cove end of East Point Road and Veruna Bay is a beautful sandy beach but with limited parking.  But be prepared to to brave the cold Pacific waters. Tidal pools are alive with anemones, crabs and starfish and can be found in all three locations. You can take Harris Road past the Saturna Island Family Estate Winery which leads to beautiful Thomson Park and Saturna Beach at the island’s southwest corner.  Thompson park was once a farm and still has beautiful pastures, fruit trees and easy access to the water. 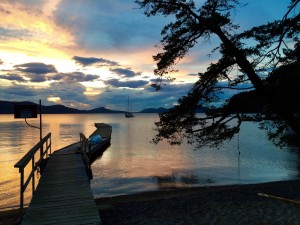 Mount Warburton Pike (397m/1,303 ft.) is probably the best viewpoint in the Gulf Islands, and is named after a 19th century British explorer who settled on Saturna in 1886. The TV tower at the end of Staples Road marks the start of the spectacular Brown Ridge Nature Trail. The hike is an easy 2-hour return trip along dirt paths. Watch for the resident herd of feral goats!

There is a band of parkland running from the Saturna Vineyard, which is sadly no longer operating and is for sale, past Murder Point and on to the remains of an old stone house and quarry at Taylor Point. Park and walk from the end of Trueworthy Road near the winery. 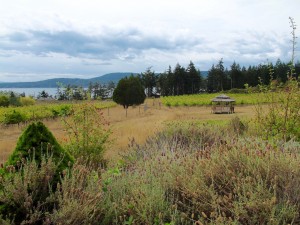 There is a short 1.5km/0.9mi trail that connects this beautiful waterfront park at Saturna’s northwest corner to the open waters of the Strait of Georgia. Boardwalks and footbridges are part of a route that leads through meadows, forest, and marsh before reaching the ocean’s rocky edge at boat passage. This narrow band of water connecting the Straits of Georgia with Winter Cover can become a raging strip of white-water when the tides are right. 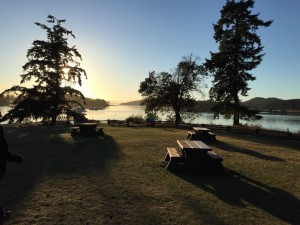 East Point is a must see spot on Saturna Island. There is a light station at East Point which warns ships away from the offshore Boiling Reef, and a couple of short hiking trails around the point. The Trillium Trail will take you out to the old Fog Horn Alarm building and grass meadows at the end of the point, and the Cliffside loop which takes you down on to the rocky shore where there are amazing sandstone formations. It’s lots of fun finding shapes in them.

East point and Boiling Reef is a favourite fishing spot for Orcas, members of J-Pod from May through November, and in fact is the most likely spot in the Gulf Island to find Orcas. You are also very likely to see Dall’s Porpoise, harbour seals and sea lions fishing here as well.

At the far eastern end of Narvaez Bay Road, there is a half-hour forest trail through second-growth Douglas firs to picnic grounds on a point of land separating Little Bay (aka Smuggler’s Cove) and Echo Bay. There is a more strenuous trail that veers off the main trail to Monarch Head.

Thompson Park is founded on a tract a land once owned by one of the first homesteaders on Saturna Island.  It is also the site of the first post office and ‘Pike’s Landing’, the first general store.  Wandering around this beautiful park you will still find remnants of the old homesite including foundations, a row of magnificent century-old locust trees, and fruit trees.  There is also a covered picnic area and a dock. 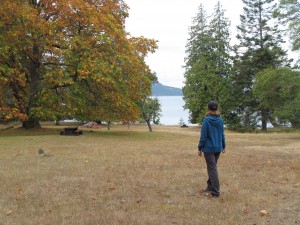